Carnivorous Plant Newsletter (CPN) was created by Don Schnell and Joe Mazrimas with the first issue in April 1972. In the early 1970's, like the early 1800's and early 1900's, the only reasonable way to correspond with people long distance was by postal mail. Don Schnell, a medical doctor, and Joe Mazrimas, a biochemist, had an interest in carnivorous plants, to put it mildly, and dozens of correspondents around the world with whom they discussed their plants. With their demanding day jobs, they were looking for a way not to spend as much time writing dozens of letters a week to their CP friends. Maybe creating a newsletter would make life easier.  Were they in for a big surprise.

The initial newsletter in April 1972 referred to itself as volume 1 number 1. How many newsletters refer to the first issue as volume 1 number 1? The ones with pretensions of being more than a newsletter in the literal sense and with the intention to become a long term institution. From the beginning Schnell and Mazrimas envisioned an international newsletter with topics well beyond the latest news. Yes, it would have "news and views" where anyone could communicate to all the other subscribers, want ads, and sales ads. But it also had lists of books, summaries of recent scientific publications and feature articles written by experts. CPN was also international. By the second issue about half the subscribers were outside the USA. The countries included England, Canada, Australia, and Japan. For more information of founders of CPN and the early years, please see Joe Mazrimas and Don Schnell's CPN article and Peter D'Amato's CPN article about the founding of CPN.

The first issue of Carnivorous Plant Newsletter was mailed to a couple dozen subscribers. The second issue mailed in July 1972, had almost 100 subscribers. In 1975 the subscribership was capped at 450 for technical reasons. In 1976 it was capped at 650 subscribers. The dramatic number of subscribers indicates there was indeed a void that CPN helped fill. Eventually subscriptions would approach 1500 and 2000 copies of each issue were printed to cover current and future demand.

The reason for capping the number of subscribers initially were partly the limits of the inexpensive printing technologies but mostly because of the decision to maintain a policy of subscriptions as per volume. If someone subscribes late in a year, they would get all the issues for that year. This subscription model made sense at the time because the only archive of CPN was the old printed issues and it was easier to manage per volume subscriptions than keep track of each person's expiration date. The per volume model persisted until 2007 when the ICPS started to use the ClubExpress website to manage memberships. Also at this time electronic copies of all back issues became available on CD/DVD and on the internet obviating the need for a stockpile of printed back issues for future members.

In 1977 for volume 6, Larry Mellichamp and Leo Song joined the CPN editorial team and management of the newsletter was transferred to the California State University, Fullerton, Arboretum, where Leo Song worked. During this time it was common for universities to provide an umbrella for scholarly journals and newsletters. This move spurred a number of changes with CPN. The first major change was the transformation of the printing of CPN from a simple newsletter format to a professional journal format. The editors found it was easier and cheaper to switch from an 8½ by 11 inch stapled newsletter to a 6 by 9 inch magazine-style booklet. As a bonus, the printer could handle mailing. The result was issues that would be easier to read and there would be good quality black and white photos as well as some color photos.

As an example the early content of CPN, these are the articles published in 1978, the first year CPN was published in journal format: 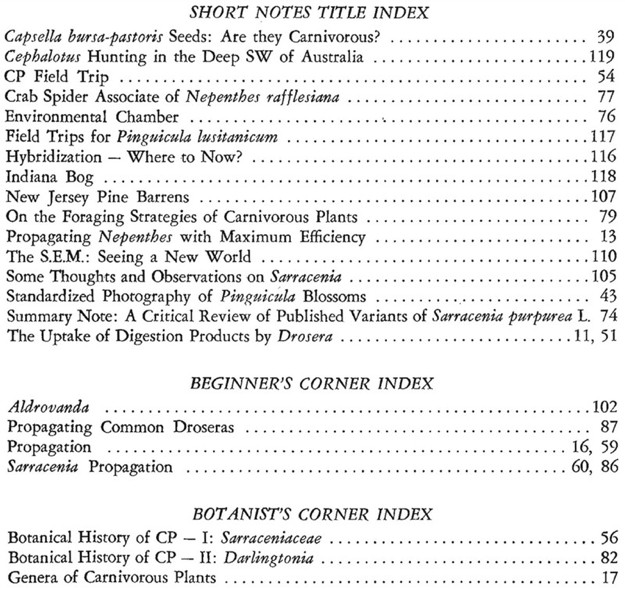 There was more in those issues including News and Views which consisted of short announcements and comments sent in by subscribers, as well as want ads, sales ads, reviews of recent scientific literature, book lists and reviews, and whatever else the editors might find of interest. Not all of this content is on the CPN website. To dig deeply into the older issues of CPN, it is best to review the full issue PDFs available to members on the ICPS ClubExpress membership website.

When the CPN editors formed the association with the California State University, they were required to create a legal entity to be the publisher. The name "International Carnivorous Plant Society" was chosen. The name was announced in the March 1980 issue of CPN, and the new society was implemented with the March 1981 issue. The subtitle of CPN became "Journal of the International Carnivorous Plant Society". This name fully expresses the intent of CPN from the day CPN was conceived.

In 1996 at the end of the first 25 years of CPN, the International Carnivorous Plant Society was the publisher, Don Schnell and Joe Mazrimas were the editors, Steve Baker did layout, Leo Song was the business manager, and Kandid Litho did the printing. 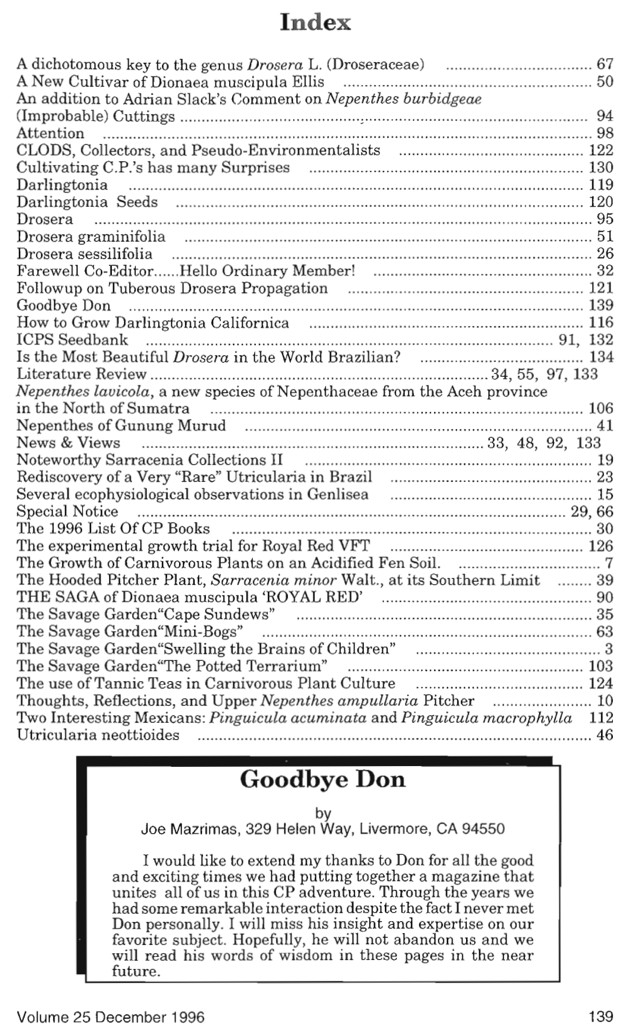 To get more of the flavor of the early years, please see the actual editorials listed below.

Reminiscences by the founders about the newsletter years: “Back in 1970, the two of us were independently studying and growing carnivorous plants when we were introduced into correspondence by a mutual friend--to this day we have never laid eyes on each other."

Detailed history of CPN during the tenure of Don Schnell and Joe Mazrimas.

Greeting in first issue: “We certainly cannot say there was less work involved in preparing this newsletter than anticipated, but the work was more than countered by the pleasure of at last beginning to fill a void among carnivorous botanists: A regular channel of informal communication.”

"We enthusiastically welcome the large number of subscribers who are also members of the Insectivorous Plant Society of Japan. These people have been organized and bulletinized for years and Katsu Kondo has a brief introductory history of this active group in the SHORT NOTES section. We are certain that a great deal of valuable knowledge and experience will be exchanged."

"There is an old cliche that everyone has one good novel in him and we would extend that notion to the effect that every CPN subscriber must have a short note in him. Non-academically associated subscribers need not feel shy--avocational and hobbyist botanists have contributed important material to science for years and any academic graybeards who may not recognize this do so at their own loss."

"This year, we have planned much larger printings and predict an ultimate number of 600-650 subscribers Clearly. CPN has grown over its four years and this growth is a measure of interest on the part of amateur and professional botanists alike."

"For the future, we intend to embark on a more active and outgoing commitment to conservation through CPN. We hope this additional editorial activity will meet with reader approval and we encourage your comments."

"We have added two new co-editors and The Arboretum at California State University Fullerton has assumed the task of publishing and distributing CPN."

"We have been informed that all mailings, especially to places outside the USA, must now be wrapped--that is, enclosed in some sort of cover other than the type we have used for so many years. It is with this in mind, as well as the possibility of putting out a more professional looking newsletter with an added bonus—COLOR—that the following is proposed."

"We will be starting the New Year with the new 6 X 9 inch color cover booklet format."

"What a difference a year makes. We begin this, our seventh year, with a completely new format and our first color plates."

"In response to the need for more responsible implementation of the Endangered Species Conservation Act of 1973, especially as it applies to the Plant Kingdom, a group of interested individuals ranging from professional botanists and horticulturists to laypersons have formed an organization called "The National Consortium for Plant Conservation"."

"Write to your Senator or Representative and let them know how you feel about protecting S. oreophila and the 7 other Carnivorous Plant species on the Endangered List."

"Starting in 1981 we will be known as the International Carnivorous Plant Society (ICPS). Instead or being merely "subscribers" to CPN, you will become "members" of ICPS, with a subscription to CPN as a benefit of this membership."

"Many people, especially those with great experience with various botanical and plant societies and their bulletins, newsletters and journals, commented on how CPN grew into such a fine publication and never was associated with an organization. So, after many suggestions that we do indeed organize, we finally put the cart in front of the horse and put the International Carnivorous Plant Society together more than a year ago."

"By this time you are wondering what happened to CPN. ... Thank you all for your patience and understanding. Keep those articles coming."

"I wish to apologize again for the delays experienced in getting CPN into your hands."

"You may have noticed a slightly different look to CPN during the past year. We have entered the era of desk top publishing."

"With this issue, CPN completes its second decade."

"We are presenting another double issue to try and catch up."

"With this issue of CPN, Leo Song bids us farewell in his capacity as co-editor in charge of composing, printing and distributing CPN." 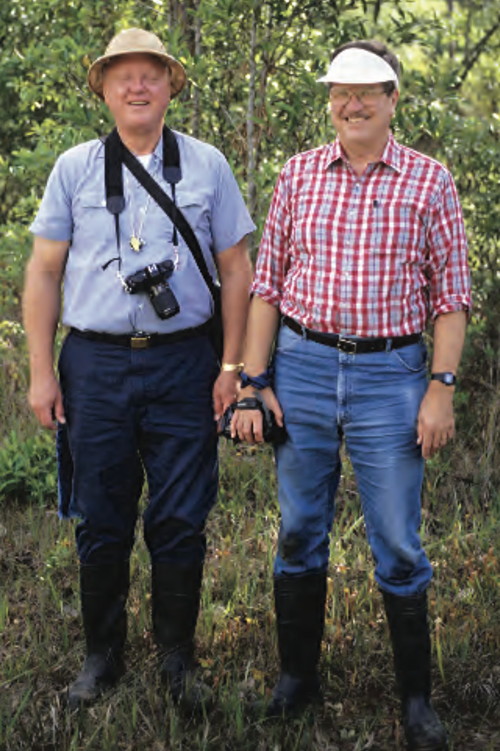 Don Schnell (left) and Joe Mazrimas (right) did not meet in person until 1997. This photo was taken in 1999. It was originally published in CPN Volume 40, June 2011, with the names reversed. 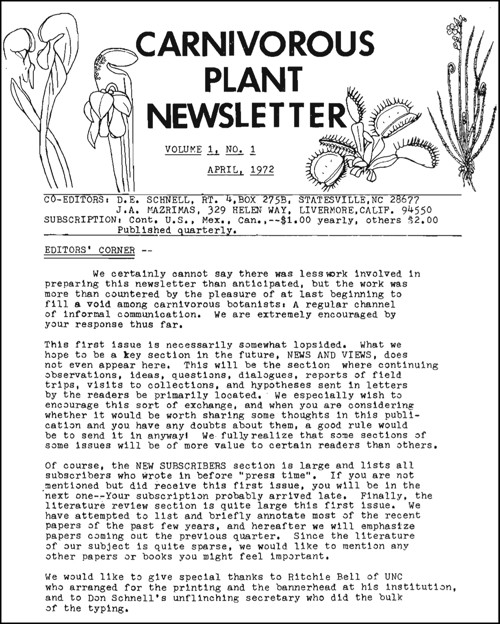 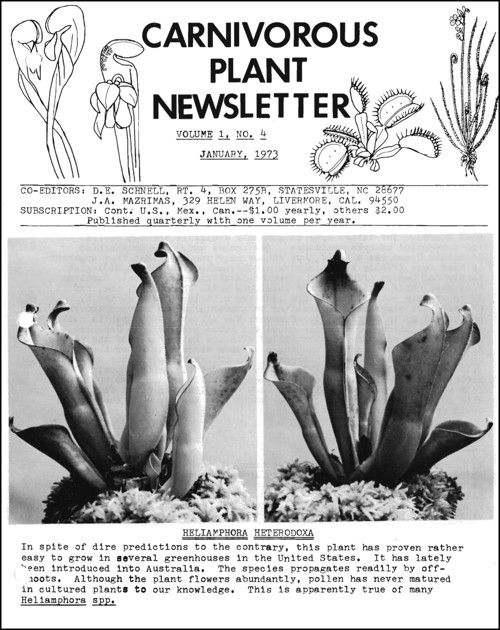 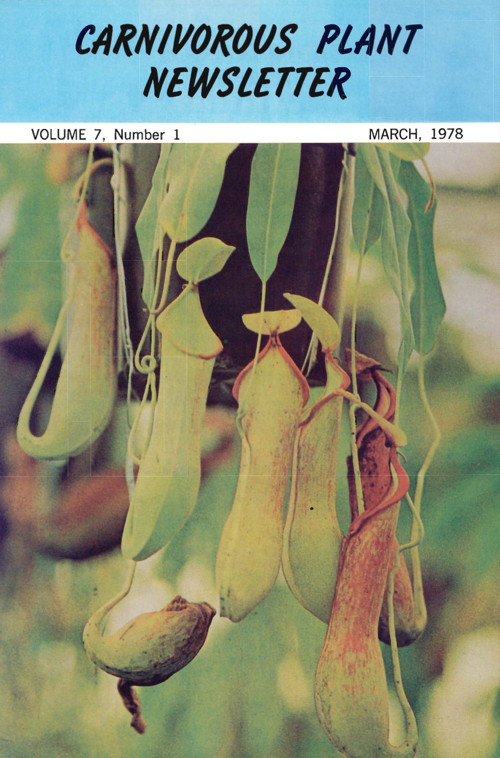 CPN volume 7 number 1 April 1978, the first issue of CPN in journal format and with color images. 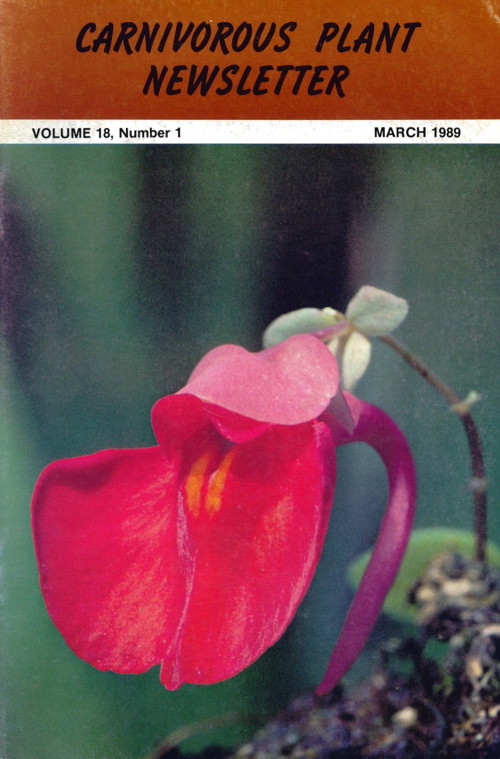 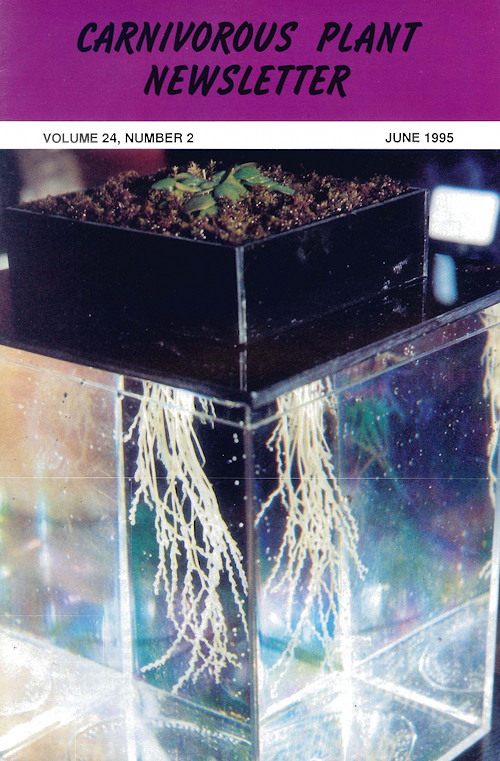 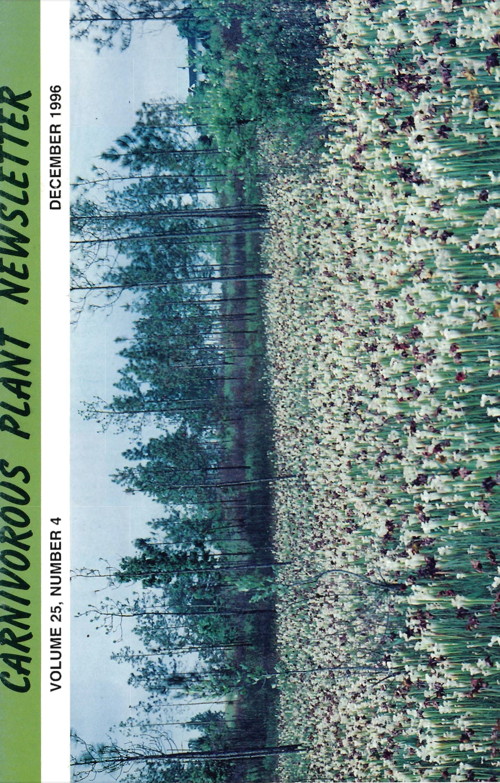