Rhizomes of Sarracenia can have rot issues for a number of reasons. Freeze damage is understandable. A different and much scarier issue is when plants die during the growing season. Sarracenia are very tough plants but they, like most plants, can be killed.

Freeze damage in cold sensitive species and clones results in mushy rotting rhizomes. Usually it happens when there is an early or late freeze when the plants are not fully dormant. The most likely species for this to occur are Sarracenia psittacina, S. minor, and S. leucophylla. When this happens you either need to grow different species or clones or protect the plants better during the seasons your location can expect freezes. These plants can be rescued if there is any part of the rhizome that is firm and the usual white color. Remove any part that is soft or brown and replant.

Of more concern is plants dying during the growing season. When you have an older plant with an old, big rhizome, many times the old part of it is dead. You will also have dead tissue on the outside of the rhizome such as old petioles. Under typical low nutrient conditions this dead material is relatively inert and harmless. However, add some fertilizer, and apply just a little too much, and you wake up a storm. Rhizoctonia and Fusarium are weak pathogens, but when given food, they can take a toll on your plants, especially your older ones. The pathogens will first eat the dead material, gain momentum, and then attack live tissue.

Another way these pathogens enter the plant is via roots. If you burn the root tips from over-fertilizing or watering the plants with water that is too salty, pathogens start climbing up the root until they get into fresh tissue. Cutting out the main growth point can save the situation, but only if you get it VERY early on. In most cases, the pathogen travels in the phloem, so while the growth point may look healthy, it's already infected and in a matter of days will wilt.

Seedlings do not have all of this dead material, so when comparing old plants to younger ones, it's harder to kill the younger plants. However too much fertilizer or salt will kill any Sarracenia, regardless of age and stage.

How do you prevent such catastrophes?

1) Do not soil fertilize your adult plants—they should be able to catch a plenty of insects anyway and get plenty of nutrients on their own.

2) Isolate any sick plants from the rest immediately.

3) Clean away all dead material when repotting—don't just clip old leaves off, pull them off like you would pull off an artichoke bract to eat. Cut off dead rhizome ends until all brown material is gone. Even if it's a little brown spot in the middle surrounded by good tissue, get rid of it. Your plant may get smaller because of all the rhizome you cut out, but that's better than losing the plant altogether and causing a potential disease outbreak.

4) If you live in a mild climate zone such as USDA climate zones 9 and 10 or have your plants in a greenhouse, divide in late fall right when the plants go dormant. If you give them all winter long to callus, by the time they start growing, they're protected better from pathogens and can focus their energy on growth, not healing. In USDA climate zones 7 and 8 where most Sarracenia can overwinter outside it is probably best to wait to divide the outdoor plants until late winter after the time extended freezes occur.

5) If you have high salt water such as you would get from well water, frequently leach out the salts via overhead watering. Repot the plants more frequently.

6) When purchasing new plants, quarantine them for a week or two before placing them amongst the others.

Prevention is the best way to combat rhizome rot. Do not let it happen in the first place because you might as well toss your plant if it does.

The Pitcher Plant Project—Cut It Out. Robert Co's battle with the consequences of too much fertilizer in the soil.

Penn State Extension—Cylindrocaladium. This pathogen has a number of species and kills a wide range of plants. 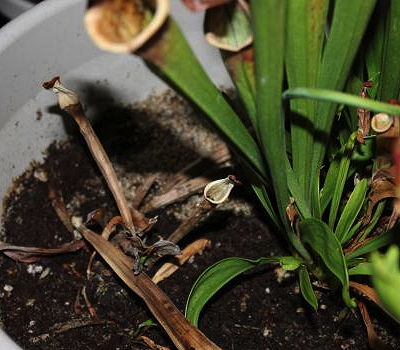 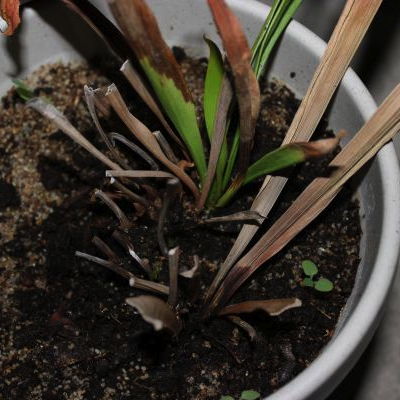 Dead growth point and dying growth point. These plants were damaged by a combination of salty water (TDS 350, pH 8) and being too dry. 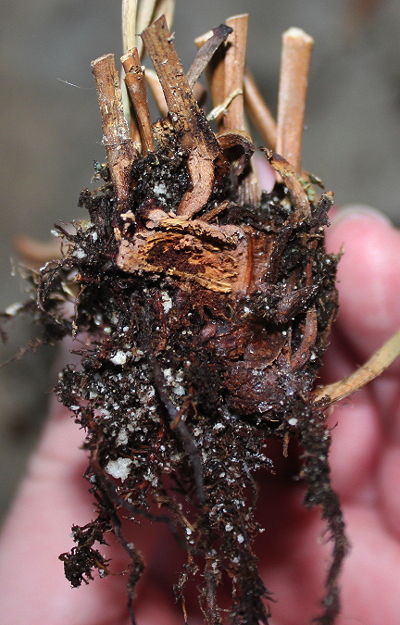 The roots are dead. The rhizome pithy. 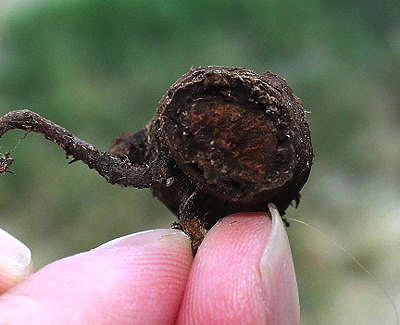