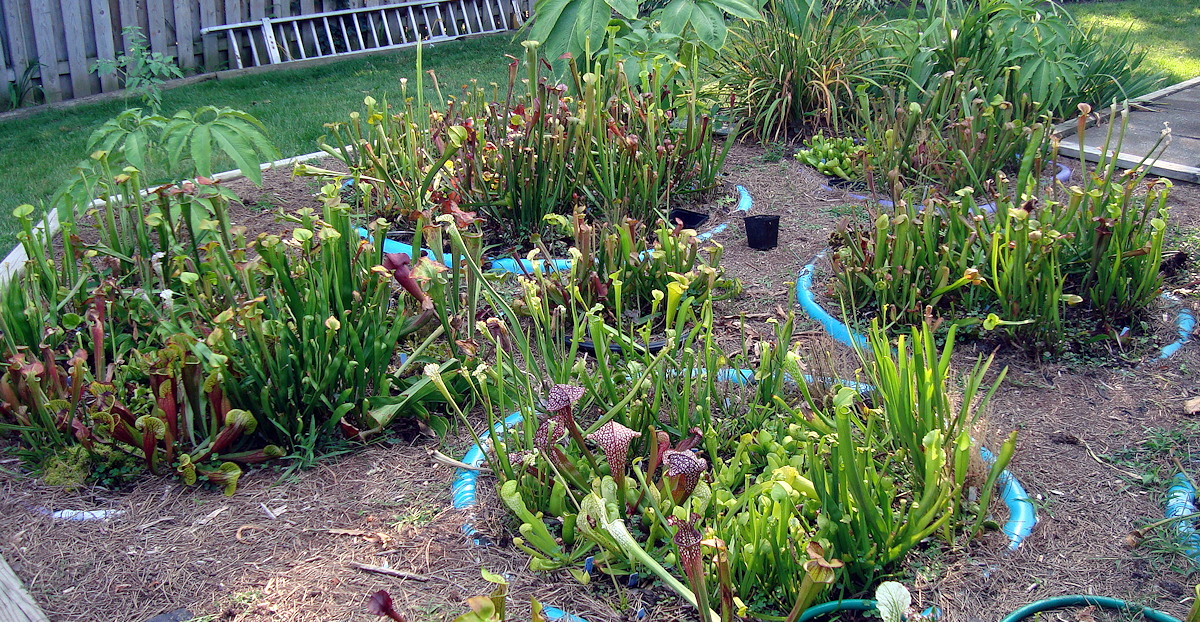 Bog garden in back yard of ICPS past president Carl Mazur in Ontario, Canada.

Carl Mazur lives in the Niagara Peninsula. An area of land wedged between Lake Ontario and Lake Erie. The moderating effect of these two large bodies of water gvies the area a USDA and Canadian Plant Hardiness Zone 6B rating and has earned the Niagara Peninsula the nickname "Canada's Banana Belt". This milder climate is not only perfect for growing tender fruit, like peaches, cherries, plums, pears and some of the best wine making grapes in the world, it is perfect for growing Sarracenia and other North American carnivores out doors year round. Many of these plans can be problematic in the USA upper midwest and northeast. Carl says "our spring is a bit delayed here in the sense that the lakes are cold and keep the surrounding area cooler. At the same time, it protects us from huge temperature fluctuations, so spring warm up is slow and gradual here. Late frosts rarely happen. We did have a late frost this spring and it froze some of the flower scapes and damaged some of the early leaf growth. These late frosts are not hard frosts, so damage is minimal. In the fall the opposite it true, the lakes are warm and our area slowly and gradually cools down. To illustrate the difference with my friend John Hummer who lives in Virginia, his spring flowers and leafing is a full month to a month and a half earlier than here, however in the fall, he usually has a frost before we do!"

The bogs in Carl's bog garden are constructed with kiddie pools sunk in the ground. Carl punches holes 1/3 the way down the side of the pools to allow excess water to drain out. The bottom half of the pool is pure Canadian peat moss and the top half is a mix of peat and sand. The plants are top dressed with pine needles left over from the winter mulch.

Carl is a Sarracenia fanatic and has all Sarracenia species and many hybrids in his bogs as well as companion carnivores like Dionaea muscipula and temperate Drosera. Anyone who has tried to overwinter Sarracenia psittacina outside in the northern half of the USA will appreciate the success Carl has had.

The key to Carl's success with his bogs is large quantities of pine needles. Pine needles make one the best winter mulches because a deep layer does not pack or rot or compost like a compost or bark mulch would. The key here is deep. For most garden plants adapted to your area a 5 cm (2 inch) layer of fine bark mulch is optimal for winter freeze and summer drought protection. A bark mulch deeper than 5 cm could compost and become anaerobic. For winter protection of plants that need to be covered deeply a 20 cm (8 inch) or more pile of pine needles works much better. If pine needles are not available, wheat or other heavy grass straw can but used but make sure it is free of seeds.

Carl likes to keep his bogs uncovered until mid December since that is when winter sets in in his area. Premature mulching could delay the plants going fully dormant. When hard freezing weather threatens he cuts back the Sarracenia pitchers then buries the plants in pine needles. Snow will generally cover the pine needles most of the winter which adds additional protection from freeze-thaw cycles. He leaves the bogs covered until mid to late March. The timing is somewhat tricky. The open nature of the pine needles can make mini greenhouses and warm the plants too much on sunny days. The plants need to ease out of dormancy as nights warm up. You will note from the photos he does not strip the needles to bare soil. A thin layer of the needles provides some spring frost protection and helps preserve water in the summer.

Carl's advice to other Sarracenia fanatics in hard winter areas is "I've learned over the years that it is easier to grow North American carnivores in either a cold climate or warm climate. In a cold climate, once frozen solid, they are fine! As long as they stay that way! In a warm climate it barely freezes like their native habitats. Although the air may drop to -10 C some nights, the soil stays pretty much unfrozen and what little does freeze will thaw the next day with the sun. In between it is difficult. Places in the middle zones have frequent freeze and thaws all winter which is very hard on the plants." 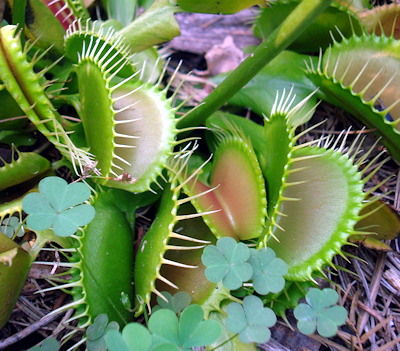 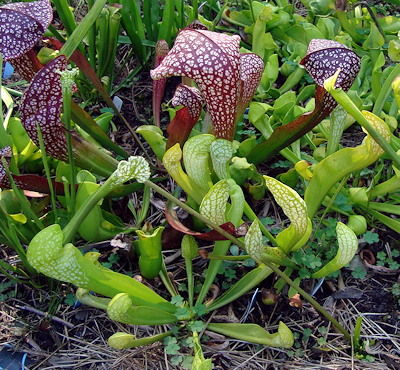 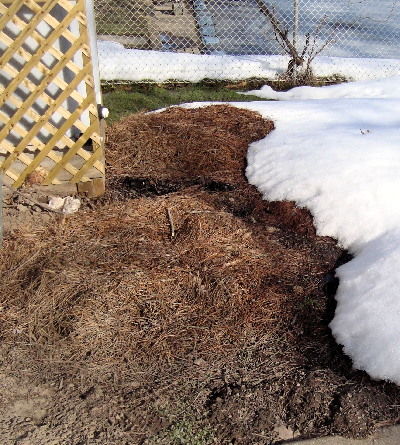 The plants spend the winter under pine needle mulch and snow. The bogs are mulched in early to mid December depending on temperatures. 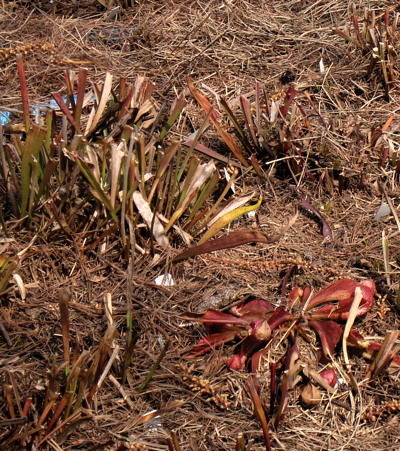 After the snow melts in the spring, the pine needles are removed. This is usually mid to late March. On the right you see Sarracenia psittacina which is difficult to maintain outdoors in locations with early and late frosts. 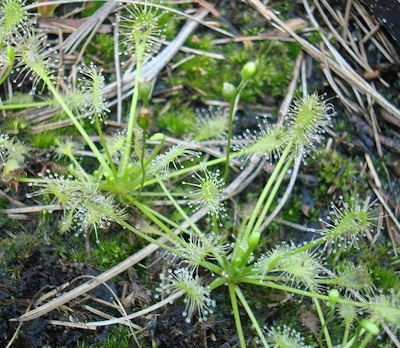 Drosera intermedia can be a nice weed in the mossy areas. This happens to be an anthocyanin free (no red pigment) variety. 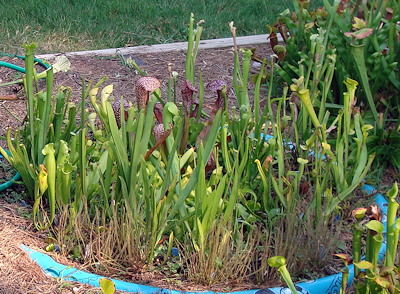 The bogs are constructed with kiddie pools sunk in the ground with holes punched in the side. This bog is a mix of hybrid and species Sarracenia with Drosera filiformis. 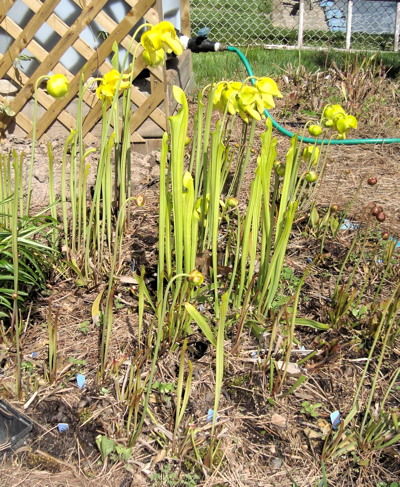 Mid May the Sarracenia flava bloom. 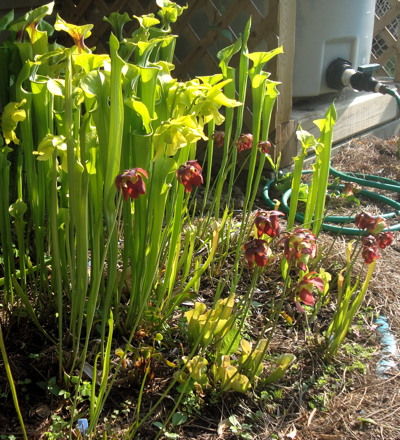 By 1 June the Sarracenia purpurea bloom. The water tank in the background is for rain water collected off the house roof.