Species of the Drosera spatulata complex are found from New Zealand, Tasmania, and Australia, through southern Asia, and into China and Japan. As would be expected with that wide a range, there are a number of closely related species and varieties. 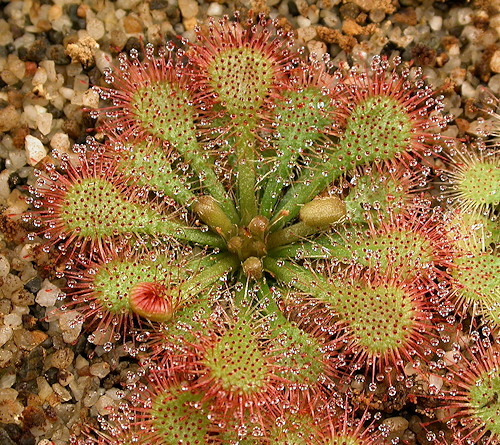 In these comparisons I have concentrated on obvious characters such plant size, flower petal color, and leaf shape. However there are many other differences between each of these varieties and species. Taxonomists need to find a balance between "natural variation" and "taxonomic variation" because taxonomy could become insane if each location of such a widespread species complex had its own variety or species.

Colenso, William (1889) On New Phænogamic Plants. IN: Transactions and Proceedings of the New Zealand Institute, Volume 21. (Drosera minutula on pp. 81-83, Read or Download)

Colenso, William (1890) A Description of some Newly-discovered Phænogamic Plants, being a Further Contribution towards the making-known the Botany of New Zealand. IN: Transactions and Proceedings of the New Zealand Institute. Volume 22. (Drosera triflora on pp. 460-462, Read or Download )

Cunningham, Allan (1840) Flora Insularum Nova Zelandia Precursor; or a Specimen of the Botany of the Island of New Zealand, IV.  IN: Jardine, Selby, Johnston, Hooker, and Taylor, Annals of Natural History or Magazine of Zoology, Botany, and Geology. vol 4. R. and J.E. Taylor Publisher, London. (Drosera propinqua on pp 109-110, Read or Download )

Hooker, W. J. and G. A. W. Arnott. (1841) The botany of Captain Beechey's voyage; comprising an acount of the plants collected by Messrs. Lay and Collie, and other officers of the expedition, during the voyage to the Pacific and Behring's Strait, performed in His Majesty's ship Blossom, under the command of Captain F. W. Beechey in the years 1825, 26, 27, and 28. H. G. Bohn. London. (Drosera loureirii p 167, Read or Download, illustration on preceding page) 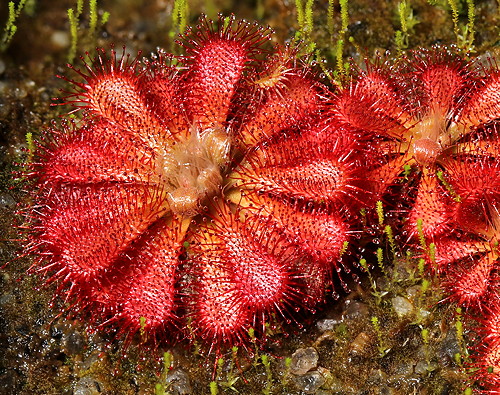 Drosera spatulata var. spatulata from Southport, Queensland, Australia. This 20 mm wide plant is of the typical Australian form, only small. 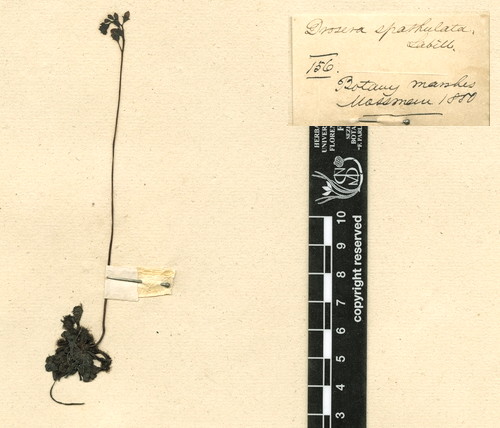 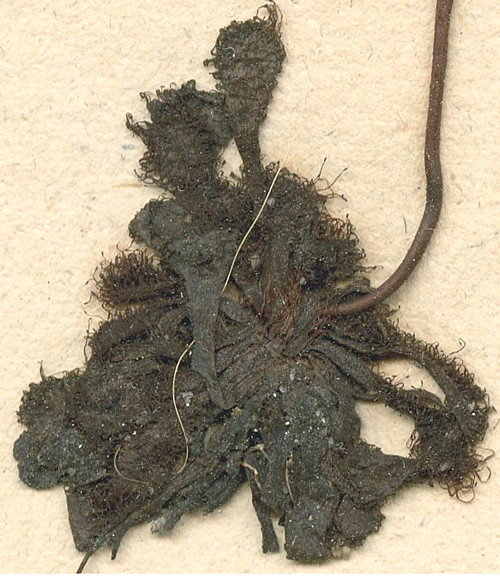 Type specimen of Drosera spatulata var. spatulata. Notice in the photo the specimen appears to have obovate laminas and long petioles.  Compare this to the photo of Drosera spatulata found near Southport, Tasmania in Gibson (1998, PDF). This image is a composite made from FI011174 available from Museo di Storia Naturale dell'Università, Firenze and JSTOR Global Plants. Original image © Museo di Storia Naturale dell'Università, Firenze. 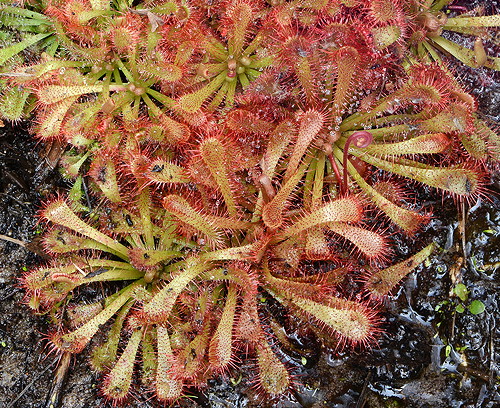 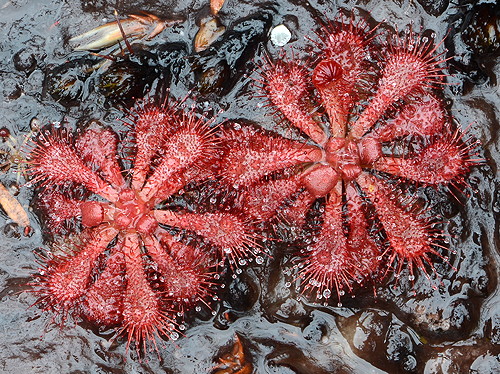 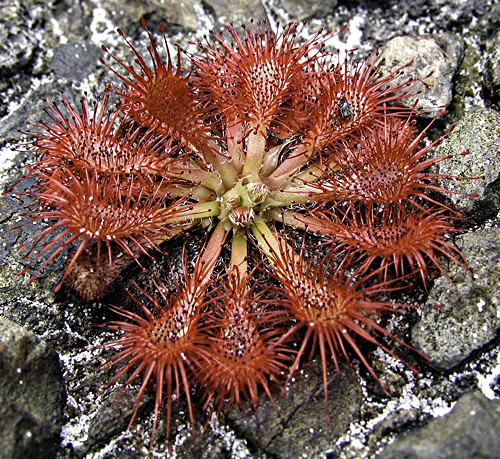 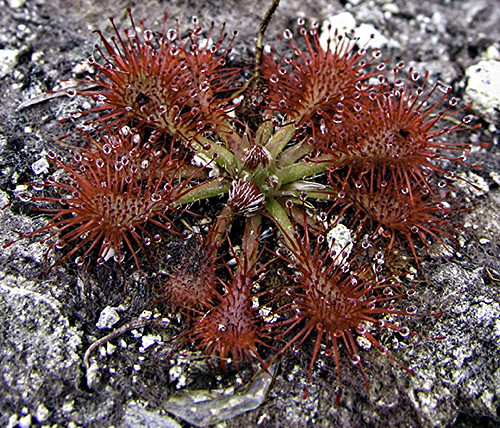 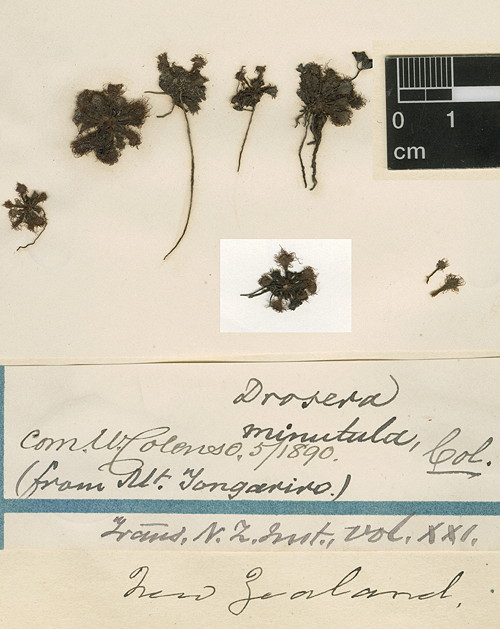 Type specimen of Drosera minutula. One, possibly two of the plants in this image appear to be Drosera pygmaea. Notice the small size of the plant, orbicular-spathulate laminas, long petioles, and very short scape. This image is a composite made from Kew K000659196. Original image © Board of Trustees of the Royal Botanic Gardens, Kew. 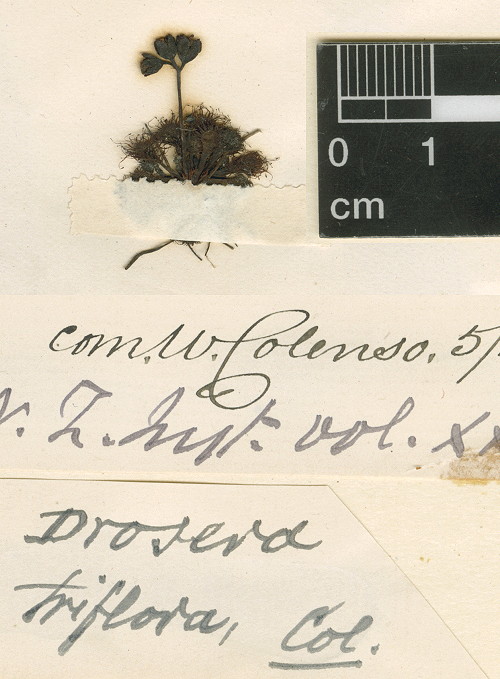 Type specimen of Drosera triflora. Notice the plant is very similar to Drosera minutula. This image is a composite made from Kew K000659197. Original image © Board of Trustees of the Royal Botanic Gardens, Kew. 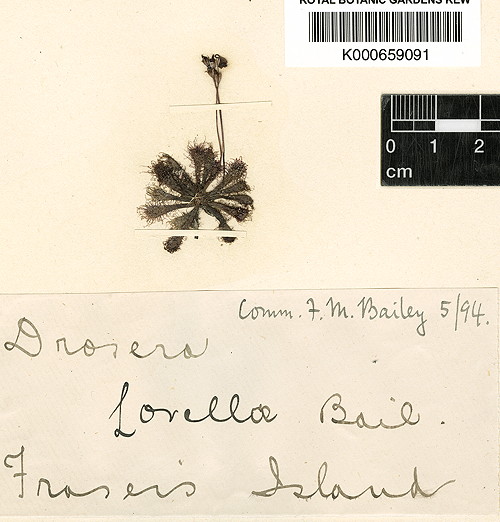 Herbarium specimen of Drosera lovellae. Notice the plant looks like a typical Australian Drosera spatulata with a short scape and is typical in size. The image is a composite made from Kew K000659091. Original image © Board of Trustees of the Royal Botanic Gardens, Kew. The actual type specimen may be viewed at JSTOR Global Plants. It is 20 mm wide. 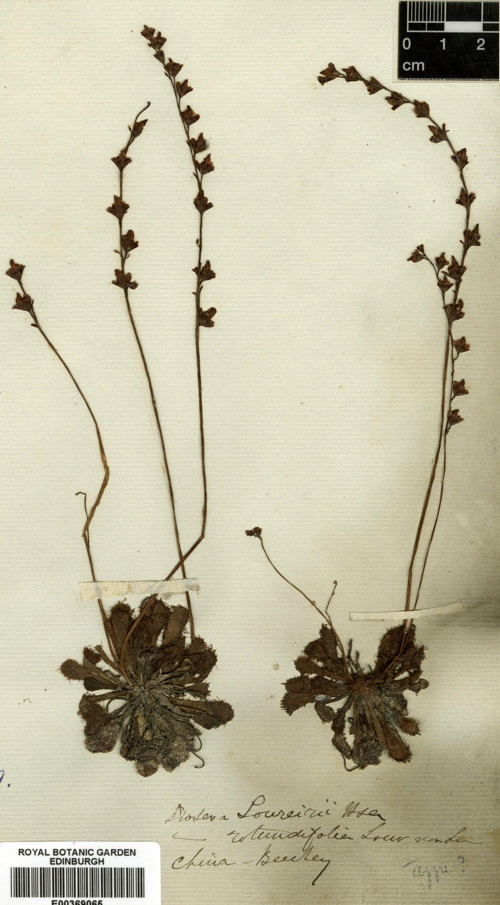 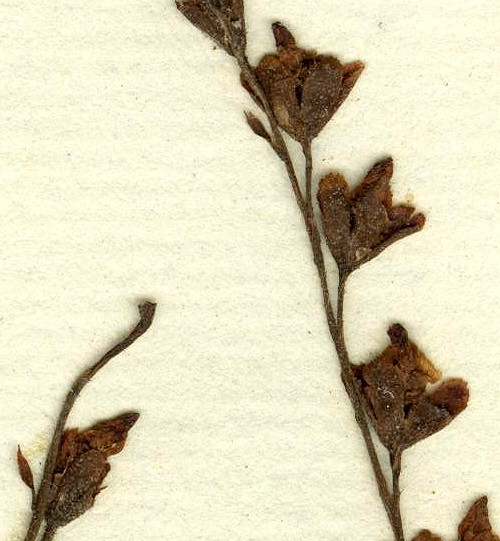 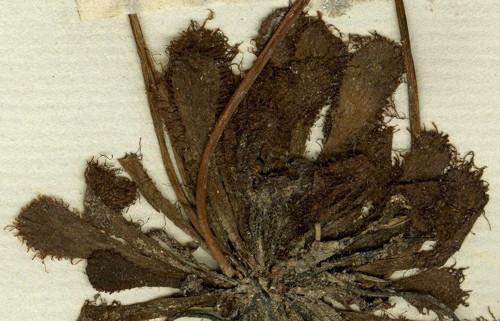 Type specimen of Drosera loureiroi. Notice how large the plant is. The leaves of this plant appear to be Drosera oblanceolata but the scapes are too long with too many flowers and the calyx has glandular hairs like Drosera spatulata. Compare the photos of the live flowers below to see the differences. That would indicate the plant is a hybrid between Drosera oblanceolata and Drosera spatulata although not a simple first generation hybrid. The upper image is a composite made from Royal Botanic Garden Edinburgh E00369065. The lower images are closeups of the plant on the left. Original image © Royal Botanic Garden Edinburgh. 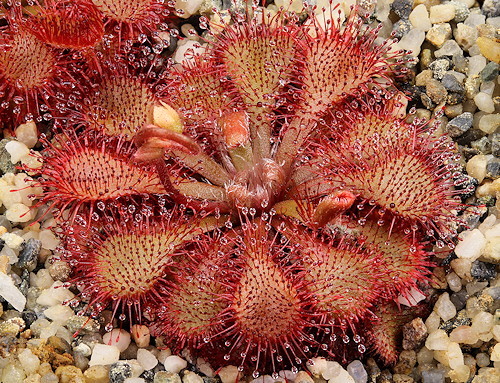 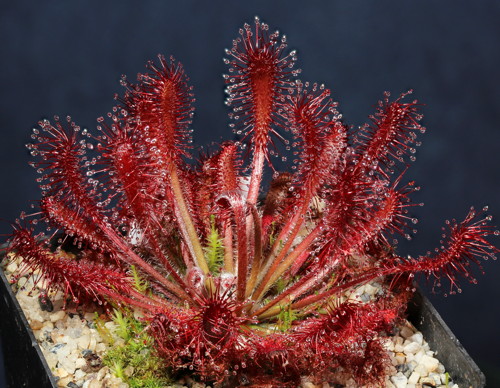 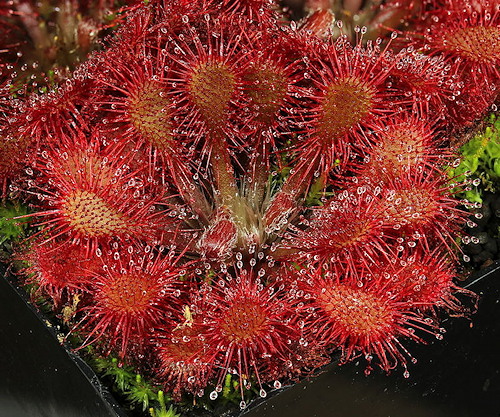 Drosera oblanceolata x spatulata. This plant is common in the Hong Kong area where both species grow. 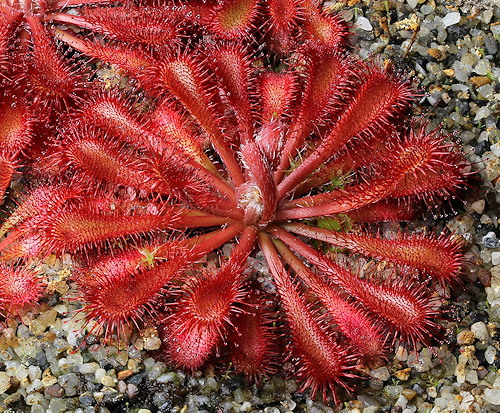 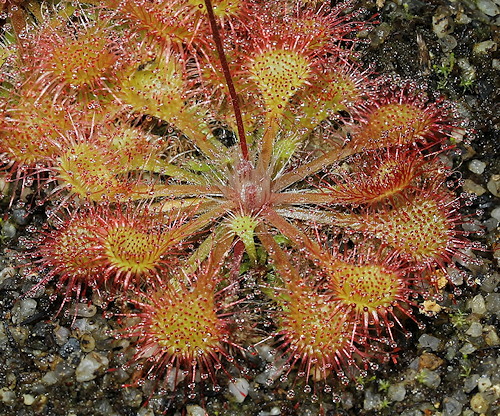 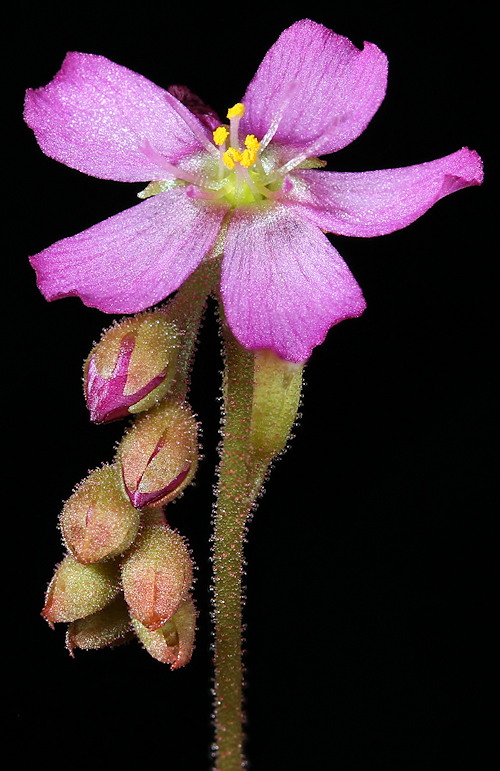 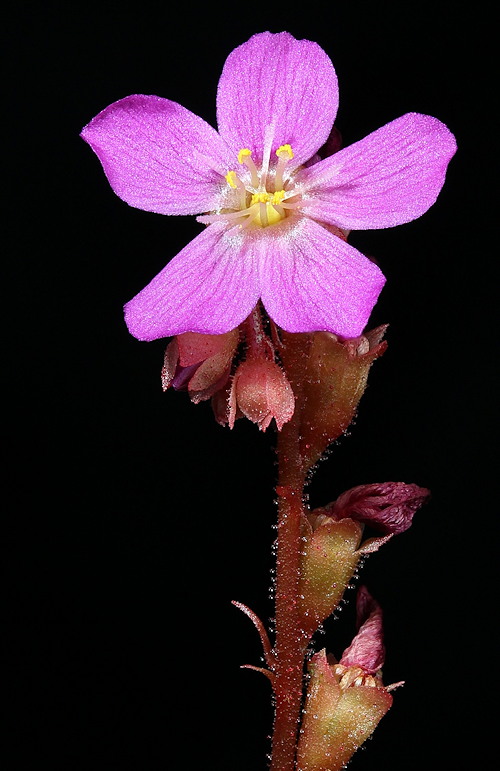 Drosera spatulata, Macao, China. Do the sepals look different enough to consider this a separate species? 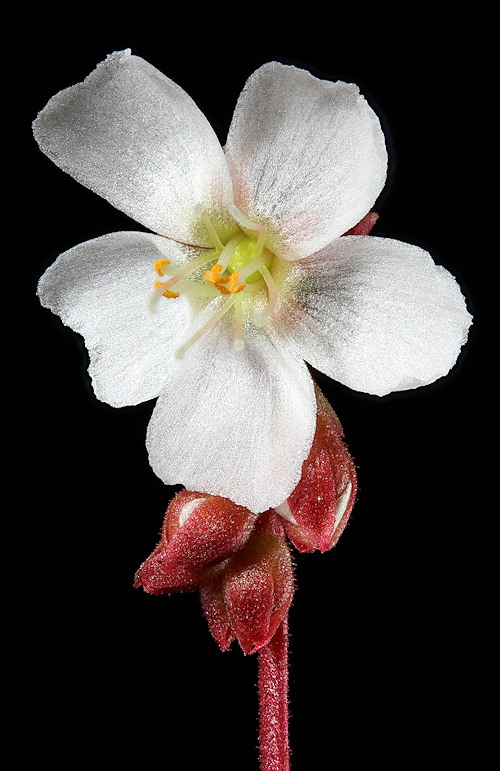 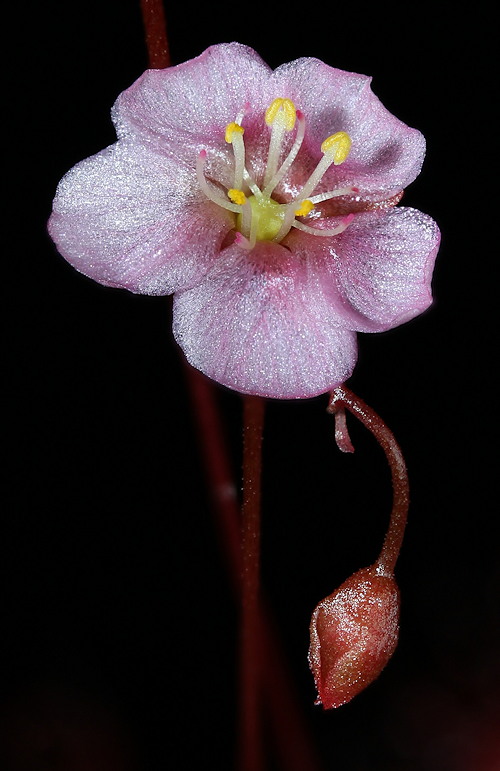 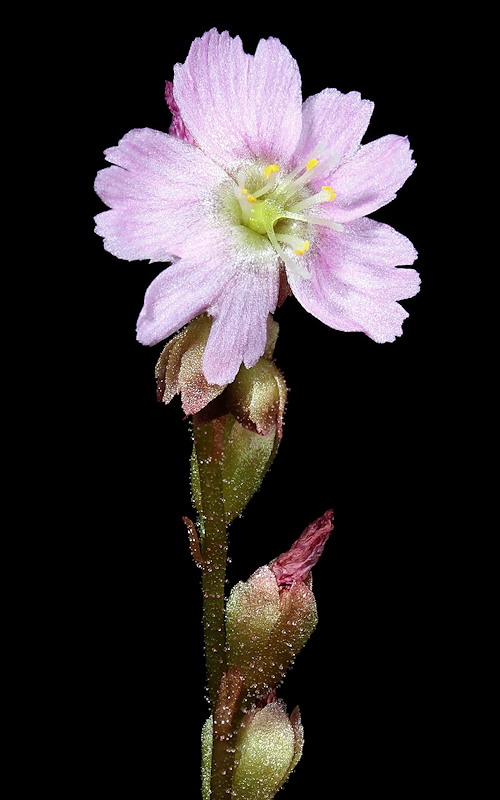 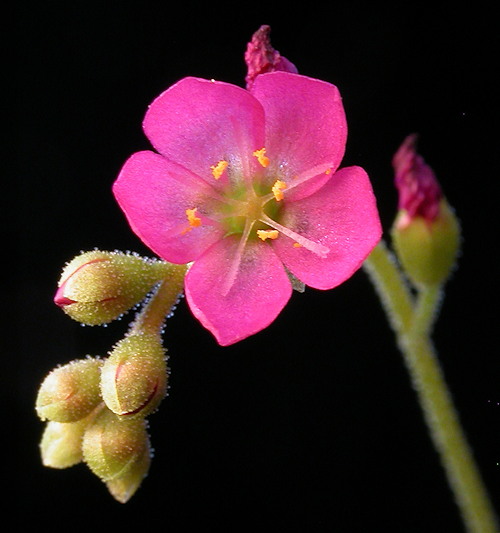