Two approaches for propagating Darlingtonia californica vegetatively are runner stolon cuttings and leaf-pullings.  Vegetative propagation is preferable to the use of seeds because it can more quickly produce large plants and you can choose to propagate your better clones.  Seeds are best if you are trying to diversify the genetic makeup of your collection.

Darlingtonia send out runner stolons that then generate new plantlets at the end of the runner.  These plants and stolons can then be cut-off and planted up separately in live Sphagnum moss.   According to Peter D’Amato, the runner stolon itself can be cut into sections and it will generate plantlets.  This method will generate more plants, but the resulting plantlets appear to be smaller than if the stolon remained intact.  Stolon cuttings have a high degree of success, so they are a very reliable method.  Unfortunately, this propagation method needs to be initiated by the plant.

Darlingtonia can be propagation by leaf-pullings.  Leaf-pullings are less reliable than runner stolon cuttings.  Leaf-pullings are especially useful if the plant is reluctant to form runners.  Reasonably large and recently grown leaves provide the best chance of success.  Pull the leaf away from the stem by tugging it backwards along the rhizome. You need to get a little of the stem tissue for the leaf-pulling to take.  Once the leaf has been pulled off, plant the leaf upright in live sphagnum moss and place the pot in a sealed plastic bag.  The plantlets form at the base of the leaf where it attaches to the rhizome, so make sure that the leaf base it covered with the moss.  Keep the bag cool and well lit area, but out of the direct sun.  With a little luck, the leaf will form roots in a couple of months.  With even more luck, you will get a plantlet in about 4 to 6 months.  Once the plantlet has formed, then it can be removed from the bag and gradually moved into more light. 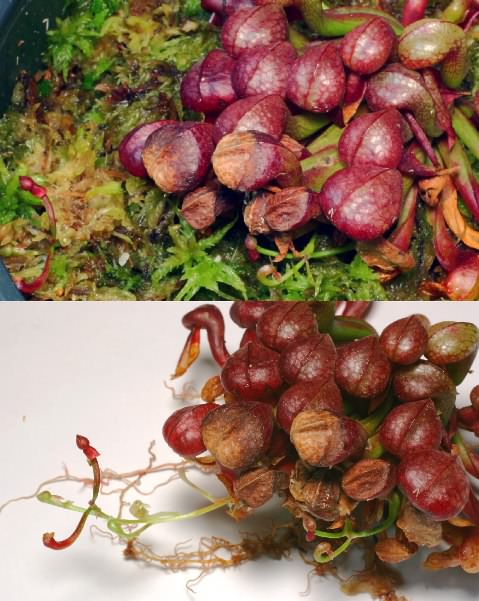 Three-year old Darlingtonia plant with two plantlets from stolon runners.  The first is on the left side of the photo along the edge of the pot and the other right below the parent plant. The soil was removed to better show the stolons in the bottom photo. 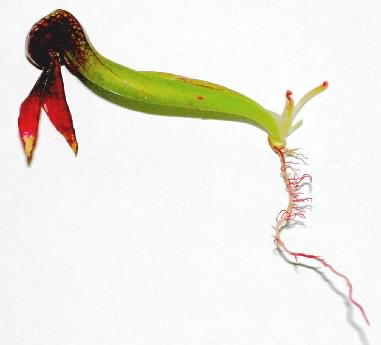