Some Drosera species have relatively large hard seeds that are difficult to germinate. The species I have had the most difficulty germinating are Drosera gigantea, Drosera stolonifera, and Drosera glanduligera. The Seed Bank was sending out these seeds to dozens of members and I couldn't get them to germinate reliably myself. The only success I had was leaving the Drosera stolonifera seed pots in my Sarracenia trays for 18 months. And even that was more miss than hit. Drosera gigantea? Once. Drosera glanduligera? Never!

Why would plants produce seeds that are very hard on the outside and tend not to want to germinate? That is a characteristic of many plants in Western Australia and other desert and semi-desert locations. The seeds can sit in the soil for many years without germinating—sort of a natural seed bank waiting for the right time. The right time or some event happens and we get germination. It could be a bush fire. It could be an exceptionally wet year. It could be the seeds have been there long enough and enough of the seed coat has worn off that it is now or never. For whatever reason, we have to duplicate what the seeds expect in their native location in order to get them to germinate.

Getting difficult seeds to germinate is not just a problem for growers of tuberous Drosera. Many species of significant commercial value also have hard seeds and ways have been worked out to get them to germinate. Professor Ellen Sutter of the Pomology Department at UC Davis suggested I scarify the Drosera seed with sand paper before planting them. There are many techniques for scarifying seed from soaking in sulfuric acid or boiling water to nicking individual seeds with knives, files, or sand paper to rolling with sand in a rock polisher. Ellen felt that using sand paper on a sanding block over bond paper would be the easiest to use and as effective as any other treatment.

Before you decide to scarify your seed, look at them closely with a hand lens. They should be and look hard. Not all tuberous Drosera species have hard seeds. Drosera stolonifera seeds are hard and look similar to the Drosera gigantea seeds, only rounder. D. rupicola seeds look like they have been popped and have a soft seed coat. There is no need to to scarify Drosera rupicola seeds. Attempting to scarify Drosera auriculata, Drosera macrantha, and others will destroy the seeds.

You can see the tools with before and after pictures to the right. The sanding block is a hard rubber block commonly found in hardware and lumber stores. It probably isn't necessary but makes the job easier. The sand paper is 100 grit. An engineer could probably calculate the optimal sand paper grit size to seed size. I'm no engineer but 100 grit seems about right to me. If there is a different grading system where you live, 100 grit is medium. Place the seeds on the bond paper or any other soft, non-coated paper. Look at the seeds with a magnifying glass or hand lens to see what they look like before scarification. Then lightly roll the sand paper over the seeds. The soft paper will help hold the seeds and the sand paper grit will nick or otherwise remove some of the seed coat. I don't press at all. I just use the weight of sanding block. After a few seconds, look at the seeds and the paper. You don't want to end up with Drosera gigantea flour! Look to see if the seeds are losing their shine and if the paper is starting to look a little dirty. Do it some more if necessary.

The Seed Bank seeds are NOT scarified before you get them. That is because scarified seeds should be planted immediately. You may not get the seeds at the right time of year for planting. Save them until the right time to plant them, scarify them, then plant them.

Scarification isn't the whole story for these species. In the carnivorous plant literature and folklore, it has been noted that most tuberous Drosera species require a period of warm stratification before the seeds will germinate. I have confirmed that seeds of "easy" species such as Drosera auriculata and Drosera peltata won't germinate if planted in the fall. They need to be planted in the middle of summer for best germination in the fall. And it isn't good enough to put them in a greenhouse. Seeds planted under greenhouse conditions in the summer do not germinate readily while seeds exposed to higher and lower temperatures out doors can produce a carpet of seedlings when the season turns to fall. I am being somewhat vague here because I don't know exactly what is required. In my experience, it seems the seeds require a month of daily temperatures above 30°C (85°F), possibly a number of days above 35°C (95°F) is required. The seeds then germinate when they are exposed to cooler temperatures such as a week with highs around 18°C (65°F). Some species such as Drosera glanduligera may cue in on night temperatures on the order of 7°C (45°F). Other species may want temperatures around freezing.

Getting seeds of these species to germinate is the first battle in growing them successfully. 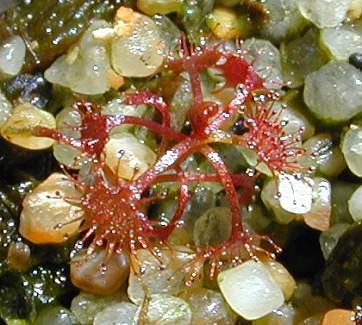 Another Drosera gigantea seedling in December after the pots were moved into a sunny location without the covers. 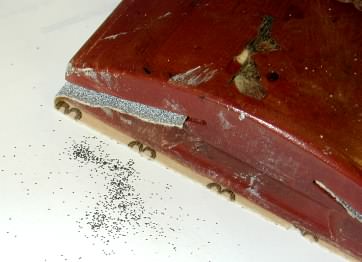 Drosera gigantea seeds ready to be scarified with 100 grit sand paper and sanding block. Don't press or you'll get flour. 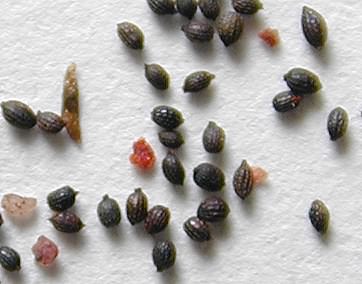 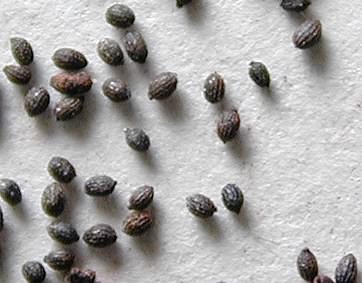 Drosera gigantea seeds on bond paper after scarification. Note the seeds are dull and the paper is looking dirty. 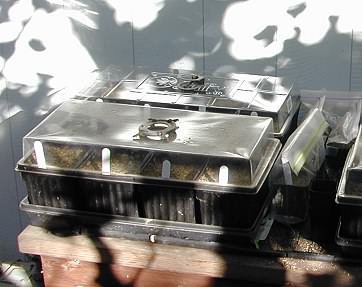 Drosera gigantea and other tuberous Drosera seeds planted outside the last week of July. The large pots are sitting in 1 cm of water in a mostly shady location. The small pots in zip lock bags have seeds of Drosera glanduligera. Note that you should not use the covers or bags if the pots will get more than a tiny amount of direct sunlight—you will end up with roasted seedlings. The trays are almost completely shaded by an Apricot tree during our very hot summer. The picture was taken in late October as the seeds were germinating and the tree was starting to lose its leaves.

(Note months mentioned correspond to appropriate times for northern hemisphere Mediterranean climate regions. A greenhouse may be necessary to provide needed conditions in colder climates. In warmer climate regions, you may need to grow species or selections that are more tropical.) 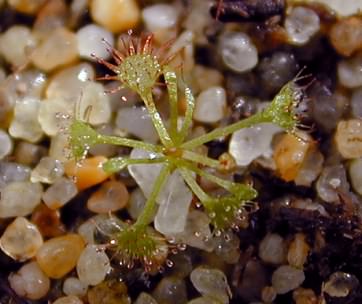 Drosera gigantea seedling in October under shady conditions. This plant germinated during a brief cold (18°C) spell in August between weeks of temperatures in the 35°C to 40°C range. Many of the seedling's brethren didn't survive the heat.