Evolution of the Ericales Carnivores

There are two carnivorous plant families in the plant order Ericales [Wikipedia]. The family Roridulaceae contains only the two species of Roridula . The family Sarraceniaceae contains the genera Sarracenia, Heliamphora, and Darlingtonia. Their Ericales relatives include kiwifruit, blueberries, persimmon, heath, rhododendron, camellia, primrose and a lot of other familiar plants. Based on DNA testing the closest families to the carnivorous Ericales are Actinidiace [Wikipedia] and Clethraceae [Wikipedia].

DNA cladogram of the Ericales carnivores (in black) with non-carnivorous relatives in green. The length of the lines horizontally are NOT proportional to genetic changes.

Knowing the closest families to the Ericales carnivores doesn't give us any hints about evolution of carnivory in this group and maybe that is a hint in itself. Roridula is found only in South Africa while its relatives are found everywhere but Africa. However its flowers look very much like Actinidia and Heliamphora flowers. With respect to carnivory Roridula has nothing in common with the Sarraceniaceae carnivores so we have to assume it evolved carnivory independently. Roridula uses a tentacle-based trapping mechanism, it does not have glands that secrete digestive enzymes, but it does have adaptations for efficient absorption of nutrients on its leaves.

The Sarraceniaceae carnivores are all pitcher plants. The exact trapping mechanism may vary among the species but they are all essentially traps constructed from a rolled leaf. It is easiest to see this in the Heliamphora leaves. Although it may look more primitive, Heliamphora isn't primitive. Its juvenile pitchers actually look like Sarracenia pitchers and the adult pitchers have features not found in other pitcher plants. The most notable feature is hole or slit which limits the water level in the pitchers. The slit has hairs to keep prey from washing out.

Darlingtonia is most basal of the Sarraceniaceae clade. It is found on the west coast of the USA at sea level on the coast and higher elevations inland. Heliamphora is found in equatorial South America at high elevations where it is generally cold and foggy. Sarracenia is found in the warm temperate region of the southeast USA except Sarracenia purpurea which is found in the northeast and north central USA and Canada. There is no evidence to help with an understanding of how or where this group first evolved because we have three highly evolved, disjunct genera with no hierarchy of features. Without fossils it is hard to know more. There is a curious fossil Archaeamphora longicervia [PDF, Wikipedia] from the early Cretaceous in China. Unfortunately this fossil is much too old to be a member of the Sarraceniaceae.

The flowers of Darlingtonia and Sarracenia are highly modified in a way that decreases selfing. Both have one-way routes for the pollinator to follow. Darlingtonia is pollinated by a small bee that enters gaps between the petals (in a photo they look like eyes) and exits (or falls) through the lower part of flower. Sarracenia is pollinated primarily by large bumblebees although there are other bees and large flies that know how to work the flowers. Common bees such as honey bees and carpenter bees do not know how or are not able to enter the flower. The bumblebees push past the stigma to enter the cavity created by the expanded style. They take all the pollen and exit under a petal. Flowers like this evolved via a kind of run-away-feedback selection: the more a species selects for outcrossing, the more genetic load it acquires, the more it needs to outcross to avoid inbreeding depression. The result is increased genetic variation within a population. The downside of this in the case of Darlingtonia and Sarracenia is if the pollinator goes extinct there isn't a backup plan.

Heliamphora uses a more typical pollination scheme among flowering plants of having the stigma mature and lose receptivity before the anthers mature and release pollen. This isn't a detriment to long distance dispersal the way self-incompatibility is since a large plant could have a number of flowers in the appropriate stage to effectively self pollinate.

There has been much discussion about what primitive Sarracenia looked like. The juvenile pitchers of all Sarracenia species look the same and somewhat like mature S. minor. S. minor also gets easily confused with Darlingtonia by non-CP people. Other candidates are S. rubra or S. jonesii because they have fewer unique characters.

Neyland and Merchant (2006) did a DNA study of the Sarraceniaceae. They used a DNA marker that nicely showed the relationships of certain clades but could not clearly differentiate the majority of Sarracenia species.

DNA cladogram of the Sarraceniaceae. The length of the lines horizontally are proportional to genetic changes.

From this you can see the genetic distance between Darlingtonia and the rest of the family is high compared to Heliamphora from Sarracenia. Within Sarracenia, S. purpurea and S. rosea are clearly delineated from each other and quite delineated from the rest of Sarracenia. S. flava, S. minor, and S. psittacina are essentially indistinguishable with the DNA marker used. The S. rubra clade is so close that Neyland and Merchant argue there is no genetic support for splitting S. alabamensis and S. jonesii from S. rubra. These results are consistent with the hypothesis that the S. rubra clade (including S. alata and S. oreophila) consists of remnant populations of one species that got fragmented quite recently.

Anderson, Arne A., Rydin Catarina, and Mari Kallersjo (2002) Phylogenetic relationships in the order Ericales s.l.: Analyses of molecular data from five genes from the plastid and mitochondrial genomes. American Journal of Botany 89(4):677-787. 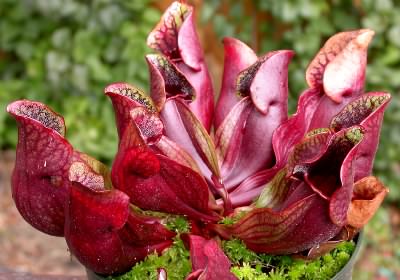 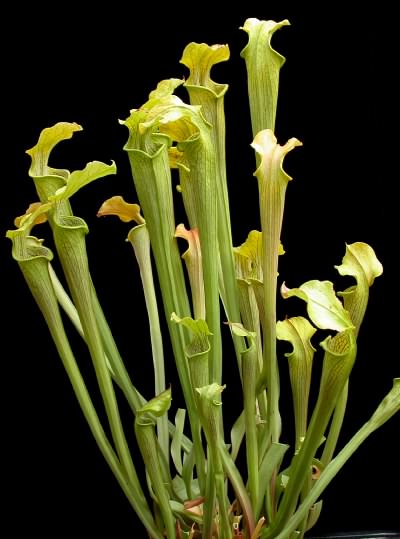 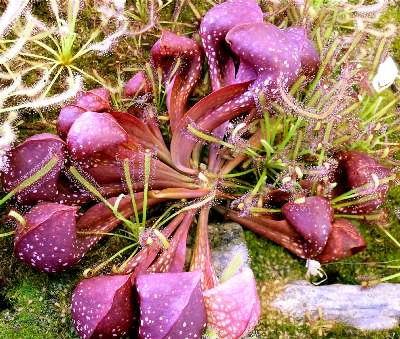 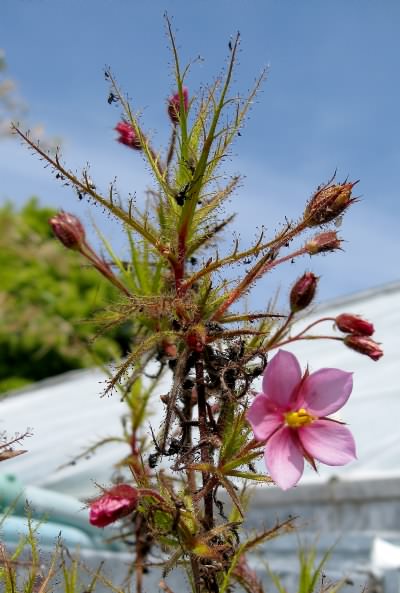 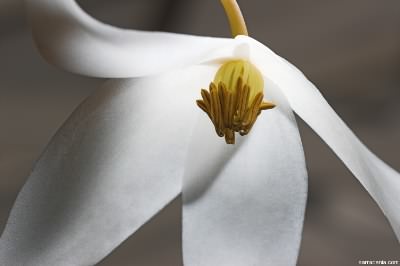 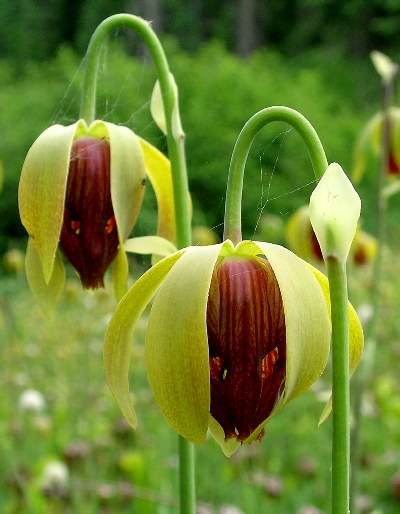 Darlingtonia californica flowers, Sierra Nevada, California, USA. The flowers have separate entrances and exits for its pollinator which decreases self-pollination. 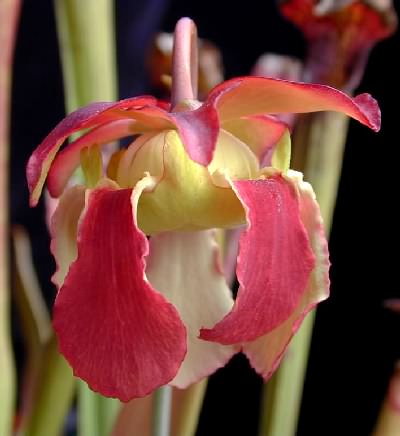 Sarracenia rubra subsp. rubra flower. To get to the pollen and nectar inside the flower, bumblebees push past the stigmas on the tips of the umbrella shaped style. They exit under the petals. Having separate a separate entrance and exit, the flower isn't self pollinated. Of course the plant can have multiple flowers open at the same time and self pollinate that way. 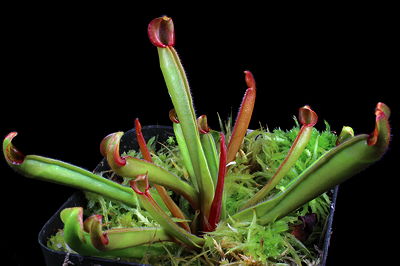 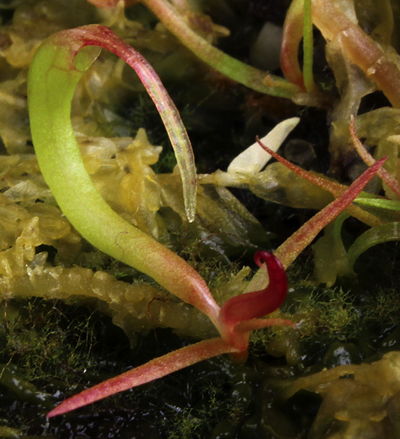 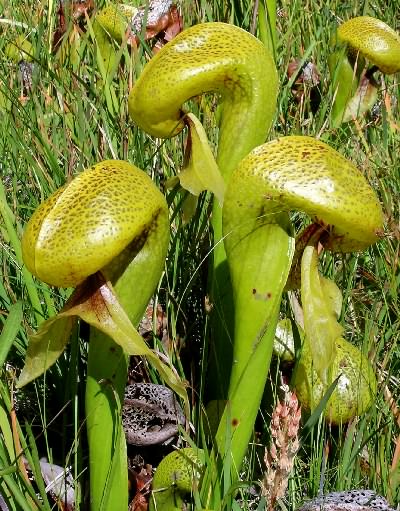