Evolution of the Lamiales Carnivores

The carnivorous plant genera Byblis, Philcoxia, Genlisea, Pinguicula, and Utricularia along with the murderous plant genera Ibicella and Proboscidea are in the plant order Lamiales [Wikipedia]. Byblis is placed in its own family, the Byblidaceae. Philcoxia is in the family Plantaginaceae, a family with 12 tribes including 90 genera with about 1,700 species. Genlisea, Pinguicula, and Utricularia are in their own family, the Lentibulariaceae. Ibicella and Proboscidea are placed in the family Martyniaceae which consists of 5 genera.

We don't know which family or families are sister to the Byblidaceae or Lentibulariaceae carnivores. The divergence happened too long ago and too quickly to be resolved with current DNA testing. The fast evolving genes do not resolve divergences that old and the slowly evolving genes did not change enough during the short time period in which the Lamiales originally differentiated. Close relatives of the Lentibulariaceae carnivores include the families Martyniaceae, Bignoniaceae (Trumpet Creeper, Jacaranda, Catalpa), Pedaliaceae (Sesame), and Verbenaceae (Verbena, Lantana). A close family of the Byblidaceae is the Linderniaceae (Schäferhoff et al. 2010).

Philcoxia is an example of a recently evolved carnivore. The genus does not have deep phylogenetic roots like the other Lamiales carnivores and in fact most carnivores. It's tribe, the Gratioleae in Plantaginaceae, contains mostly obscure families [Wikipedia]. (The vast majority of plant families are obscure so this is no surprise.) Please see Fleischmann (2012a  PDF ) for more information about Philcoxia.

DNA sequence analysis of the Lentibulariaceae carnivores provides an interesting history of the group.

DNA cladogram of the Lentibulariaceae carnivores. The length of the lines horizontally are NOT proportional to genetic changes.

We have a flypaper carnivore basal in the clade and closely related to clade consisting of an eel or pigeon trap carnivore and a suction trap carnivore. This does NOT mean Pinguicula gave rise to Genlisea and Genlisea gave rise to Utricularia. What it says is at some point in the past Pinguicula and the Genlisea /Utricularia clade had a common ancestor. At a later time Genlisea and Utricularia shared a common ancestor. That ancestor species split into two species that later became two genera. We can confirm this interpretation looking at the digestive glands of the three genera. Plachno, et al. (2005) has a summary of digestive gland fine-structural characters. There is a general Pinguicula to Genlisea to Utricularia trend. You can assign some characters to the common ancestor of the family Lentibulariaceae and some to the ancestor of the Genlisea / Utricularia clade. However, other characters are only found in Genlisea or found in Pinguicula and more derived Genlisea but not primitive Genlisea.

Was the common ancestor of the Lentibulariaceae carnivorous? The Müller et al. papers listed below discuss the milestones in the evolution of the Lentibulariaceae carnivores. Since all three genera have superficially similar, vascularized digestive glands that also function to absorb nutrients, it is likely the last common ancestor of the group was already a carnivore. It probably looked similar to Pinguicula lusitanica. That is, it hugged the ground and the leaves rolled in but did not have as developed digestive or mucilage glands. After the split with the Genlisea / Utricularia ancestor, the proto-Pinguicula further developed the digestive and mucilage glands.

The ancestor that led to Genlisea / Utricularia probably formed pitcher-like leaves. Some Pinguicula species today will occasionally produce leaves that look like small horizontal pitchers. However, those pitchers are peltate while the traps of Genlisea and Utricularia are leaves rolled into tubes (see images of a Genlisea trap to the right and a Utricularia trap below; for more on peltate traps see Evolution of the Oxalidales Carnivore). The rolled leaves would have allowed the proto-Genlisea / Utricularia to utilize a different resource if the leaves were buried in soil or leaf litter, growing in Sphagnum moss, or otherwise subsurface at some time in their life cycle (see Fleischmann 2012b). 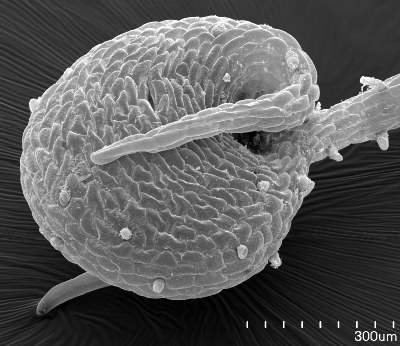 The common ancestor to Genlisea and Utricularia may have had forks at the tip of the leaves. Both genera have traps with tube openings at a fork. In the Genlisea clade the trap elongated and the forks developed into long spirals. In the Utricularia clade the trap shortened, folded back, and developed the sophisticated trap door mechanism at the leaf fork.

All Genlisea and the most basal Utricularia species have rather undifferentiated photosynthetic leaves as well as complex carnivorous leaves. These simple photosynthetic leaves could be the equivalent of the hibernacula leaves except they are spread out as a rosette instead of curled into a ball (see Fleischmann 2012b). If a temperate heterophyllous proto-Pinguicula suddenly found itself in a warm winter location, the use of the undifferentiated leaves for photosynthesis would have allowed the plant to further develop the tube-like leaves to take advantage of a subsurface resource.

However, Pinguicula alpina as we know it can not be the direct ancestor of the central American species. Besides the fact that Pinguicula alpina has a number of unique specializations not found in its relatives, it has the wrong number of chromosomes. Caspar and Stimper (2009) list chromosome numbers for 82 Pinguicula taxa. Most Mexican Pinguicula are diploids (x=11, 2n=22) while Pinguicula alpina is a tetraploid with a different base number (x=8, 2n=32). The Pinguicula ancestral base number is x=8. Most of the non-Mexican Pinguicula are diploid, tetraploid, octoploid, and hexadacaploid x=8 (2n=16, 32, 64, 128) with a few interesting exceptions. Based on chromosome numbers in combination with the DNA data, there are no clear candidates currently extant that appear to be directly ancestral to the Mexican species.

Cieslack et al. (2005) interpret the phylogeny to indicate Pinguicula originated in a humid subtropical environment and later developed specializations for surviving freezing or drying. Caspar and Stimper (2009) concur on this view based on the current locations of various chromosome variants. This is different from Jobson et al. (2003) which placed the cold temperate species basal. Cieslack et al. (2005) tested more species giving them a better picture of the genus. Even with the extra species their analysis did not show strong confidence in the split between warm temperate and the cold temperate species. Even more testing may help here or Pinguicula invaded cold temperate or mountainous regions early on, in which case the lack of confidence may reflect events that happen quickly. It may be difficult to trace any of these events if the key species in Europe were wiped out 14.8 million years ago as a result of the Nordlinger Ries impact [Wikipedia] and mid-miocene extinction event [Wikipedia].

Genlisea is found today in Central and South America, Africa, and Madagascar (see Fleischmann 2012b). There are 29 described species of Genlisea. The species have a very curious distribution. The most basal eight Genlisea species are found in the mountains of Brazil south of the Amazon. We do not say "primitive" because these species are by no means primitive relative to the more recently derived species. The next derived clades of Genlisea consists of 6 and 3 species found primarily in the southern Africa highlands of Angola and Zambia. Finally the most derived clade consists of 12 species found in Central and South America, with the highest concentration of species in Guiana Highlands of Venezuela. Fleischmann et al. (2010) interprets this distribution to be the result of two long distance dispersal events, one from the mountains of South America to the highlands of southern Africa followed by a dispersal event from Africa back to South America. Many other tropical plants show similar back-and-forth patterns (Renner 2004) including, as we will see, Utricularia.

Utricularia is found world-wide today in many habitats. The basal Utricularia species are terrestrial (Jobson et al. 2003). Multiple times Utricularia invaded other habitats. Besides bogs and fens it can be found on rock face seeps, stream sides, as an attached aquatic, and suspended aquatic. This diversity is reflected in the fact that 225 species have been described so far.

Truswell, E.M. and M.K. Macphail (2009) Polar forests on the edge of extinction: what does the fossil spore and pollen evidence from East Antarctica say? Australian Systematic Botany 22(2):57–106. 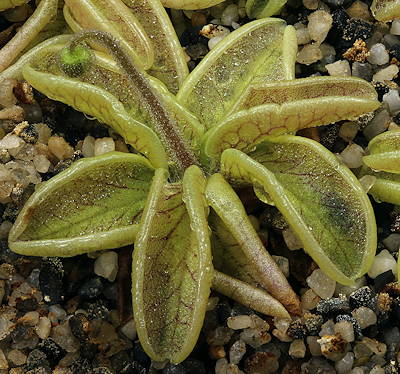 Pinguicula lusitanica. Notice how the leaves curve in.

Drawings not to scale of digestive glands from Muller et al. (2002) reproduced from other sources. Müller et al. (2006) say "Digestive glands in all three genera of Lentibulariaceae are attached to vessels, unlike secretory glands of Byblidaceae and Martyniaceae that rest on at least two epidermal cells." 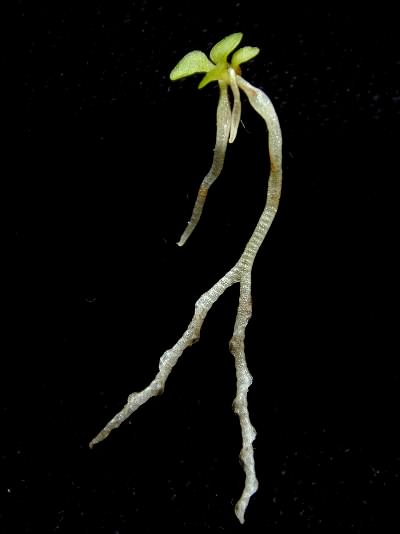 Genlisea violacea seedling showing the fork-shaped eel or pigeon trap. The white trap is actually a highly modified rolled underground leaf. You need a microscope to see the mechanism of the trap. The "stomach" is up near green photosynthetic leaves. 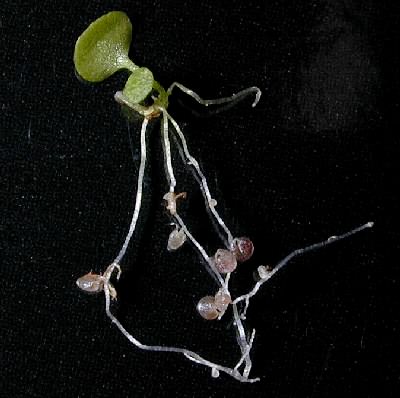 Utricularia nephrophylla from Brazil has two kinds of leaves. The brown disks are the traps which are modified leaves. The long white strands are stems. The plant has no roots. If you would see this plant in the wild all you would see are the green photosynthetic leaves and maybe a few of its cute flowers. 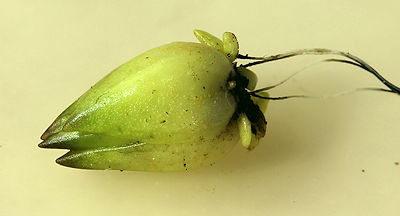 Pinguicula grandiflora winter hibernacula with gemmae at the base. 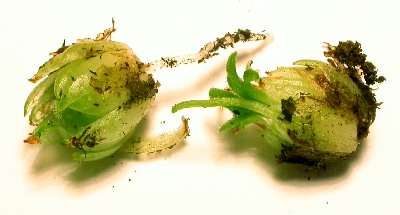 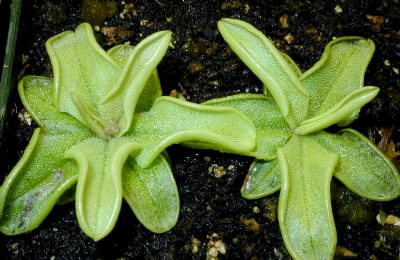 Pinguicula pumila from the SE USA. These plants look like typical temperate Pinguicula. 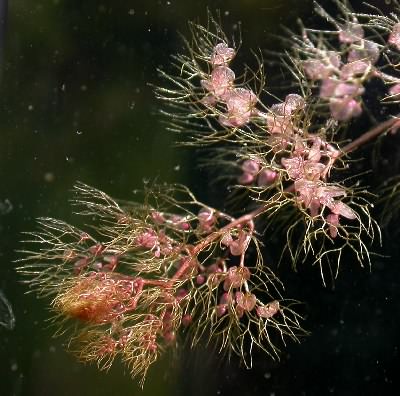 Utricularia inflata is fully aquatic native to North America. The pink disks are the traps. The plant uses its stems for photosynthesis.

"Satellite" views of the southern continents in the past. Note Antarctica has a tiny icecap and the relative locations of Antarctica to South America and Australia. Who knows whether there were seasonal bird migrations with carnivore seeds between their toes between Antarctica and the other southern continents during this time. Portions of map, © Ron Blakey, Northern Arizona University Geology. 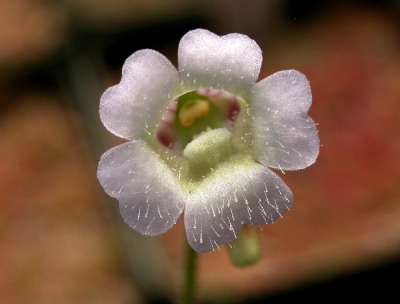 Pinguicula lusitanica is found in Europe. 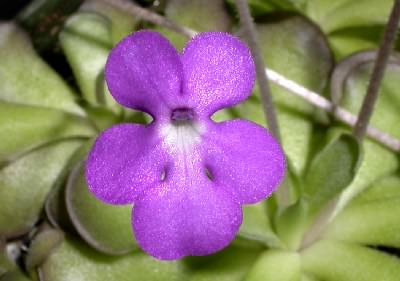 Pinguicula cyclosecta is found in the Mexican state of Nuevo León. 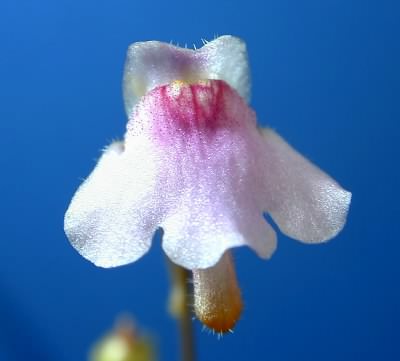 Genlisea hispidula is found in Africa. 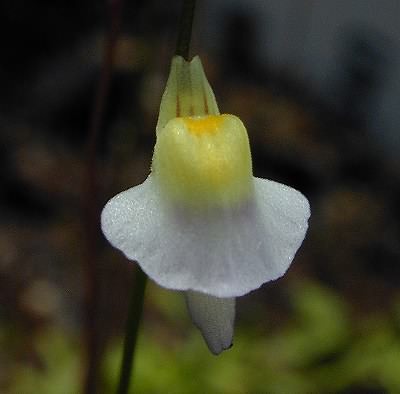 Utricularia bisquamata flower. This is a terrestrial species found in Africa.