There are four species of cold temperate Drosera found in the northern hemisphere. Drosera linearis is a hard-core cold temperate plant and is difficult to grow where winters are milder than USDA zone 7. Drosera rotundifolia and Drosera anglica range further south in the wild and can be grown outdoors in zone 9 and colder. In the wild Drosera intermedia is found in warm temperate and subtropical habitats as well as cold temperate. The plants found in the USA, Canada, and Europe form hibernacula and are considered temperate. It is a good idea to choose plants from similar climate zones as your own and grow them outside.

Drosera linearis is the most temperate and difficult of these species to grow. It is found in marl fens in the Great Lakes region and Canadian Maritime provinces. Marl is an alkaline soil consisting of clay and lime. In the fens the plants will grow in this soil or in a thin layer of peat over the soil covered with about a cm of water. No other Drosera are found under these conditions although other species are found growing nearby in sphagnum moss. The major difficulty growing the plant is that it expects to be dormant about nine months of the year. In milder climates the plant goes in and out of dormancy, sometimes at inappropriate times, causing the plants to decline. The good news is in cultivation the plant grows better in pure peat and peat/sand mixes than it does in a marl-like soil mix.

Drosera rotundifolia is found in sphagnum bogs in North America, Europe, and northern Asia. It requires a definite winter season to survive long term and plants from most locations like cool temperatures. If you live within its natural range, you should consider growing Drosera rotundifolia from your climate zone outside year round. It can be tricky growing in a greenhouse or a terrarium because the plant expects seasonal cues and expects to spend six months of the year in dormancy. Selections from coastal northern California, southern Europe, and possibly Japan may be more amenable to growing in mild climates and greenhouses.

Drosera anglica is found in sphagnum bogs in North America, Europe, northern Asia, and Hawaii. Except for the Hawaii form, this species is commonly found growing with Drosera rotundifolia. It requires a definite winter season to survive long term and likes cool temperatures. Expect it to be dormant 6 months of the year.

The Hawaiian Drosera anglica is essentially a cold tropical plant. It grows well and blooms in a terrarium or greenhouse. The horticultural hybrid between the California and Hawaii Drosera anglica also makes a great terrarium plant.

Drosera intermedia is found in shallow water in bogs and seeps of eastern North America, Europe, and along the bird Atlantic Flyway across the Caribbean and into South America. The North American and European varieties require a definite winter season to survive long term. The more northern varieties may be dormant 9 months of the year while the more southern varieties enjoy a longer growing season.

Seeds of the cold temperate Drosera need a "winter" to germinate. The simplest method is to plant the seeds in pots in the fall and put them outside and let nature take its course. You must use this method with Drosera anglica because it requires bright light during stratification to germinate. But it also works well for the other species. The tricky part is preventing rain from transferring seeds between pots if the pots are in an exposed location. A cold frame, cold greenhouse, other protected location should work well.

A more complicated but maybe safer way is to stratify seeds. Stratification is giving the seeds an artificial winter. What matters to the seeds for "winter" is the amount of time the seeds spend in a damp environment between 1 and 4°C, which is essentially refrigerator temperature. Put the seeds in a small quantity of wet finely chopped sphagnum moss in a small plastic bag in the refrigerator for 4 weeks. For Drosera linearis 6 to 8 weeks might be best and again this method will not work well for Drosera anglica. You should do this during your winter so the plants are properly in sync with the seasons. After the allotted time, the seeds and moss can be carefully spread over the surface of your favorite soil mix in a pot and light sprayed with water. A soil mix of 50:50 peat and sand usually works well. Also consider a mix of chopped sphagnum and sand. In nature these species do grow in live sphagnum but in cultivation live sphagnum can easily overgrow the plants. Please see Sowing Seeds Step-by-Step for more details on starting seeds.

The pots with these plants must always be sitting in water when they are growing.  It is also a good idea to regularly flood the pot during hot weather. All four of these species can be found in the wild growing directly in water. In the spring as the plants begin to grow, they may appreciate being repotted so the base of the hibernaculum is in the soil. 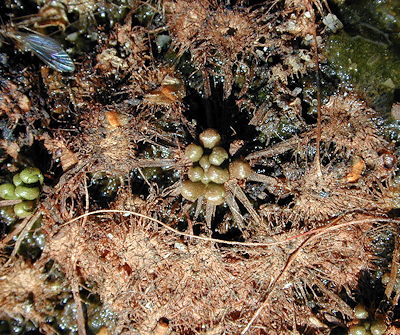 Drosera rotundifolia winter resting bud or hibernacula. This is what this species looks like a third to half of the year. Keep plants cool and just damp while in this state. 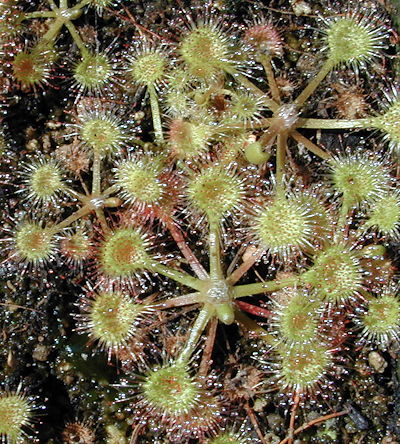 Drosera rotundifolia from Austria. It tolerates warmer temperatures than the California plants. These plants are about 3 cm across. 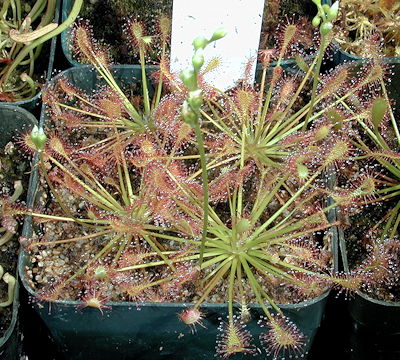 Drosera intermedia from North Carolina. The plants are about 7 cm across. They are growing in a greenhouse. Outdoors in full sun they can turn a maroon color. 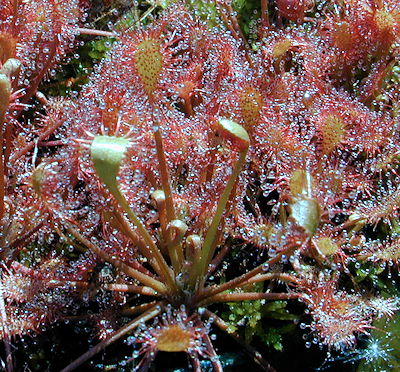 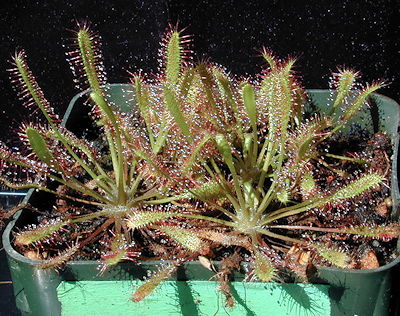 Drosera anglica growing outside in an 8 cm pot. 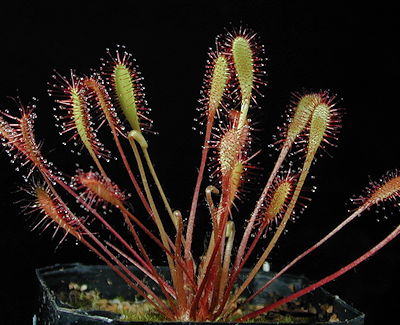 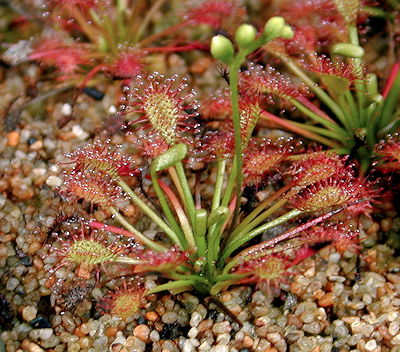 Drosera intermedia has cold temperate and tropical varieties. This tropical form is from Cuba and it should be grown like other subtropical Drosera. The plants are about 3 cm across. They are growing in pure peat with a 1 cm mulch of sand. The sand helps cut down on cyanobacteria and fungus gnats. 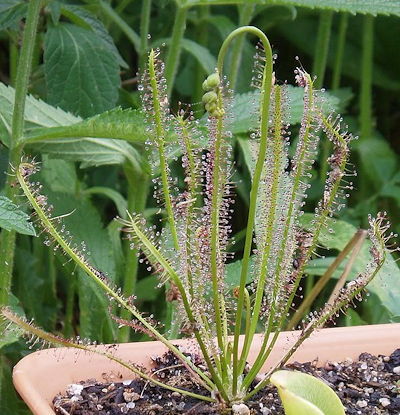 Drosera x hybrida, a natural hybrid between Drosera filiformis and Drosera intermedia found in the New Jersey pine barrens of the USA. Photo by RL7836. 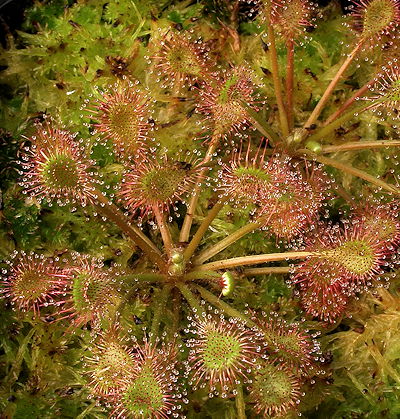