Drosera binata is found primarily in sandy marshes of southern and eastern Australia, Tasmania, and New Zealand. The species has many forms. The single fork leafed forms are most widespread with the mutiforked forms restricted to eastern Australia north of Sydney. The forms from cooler locations tend to be smaller than the relatively large plants found in the warmer part of its range. The smaller forms of Drosera binata make good terrarium plants.

This species can be a little difficult to maintain if you don't keep in mind the climates where they are found in nature. All Drosera binata forms go through a period of dormancy. They are warm temperate plants and will either seasonally go dormant if under natural light or occasionally go dormant if under artificial light. During dormancy the plants stop producing new leaves and effectively die back to the ground. If you aren't prepared to deal with dormant plants or wait for them to break dormancy, you can take root and stem cutting and start over. Better yet, if you grow the more temperate varieties, grow them outside. The typical Tasmania and New Zealand forms will do very well outside year round in USDA zones 9 and warmer. There are forms that can take colder temperatures if mulched well. If you live in an area where the soil could freeze, put the plants in a garage or other cool but protected place during the winter.

There are varieties that grow for a year or two, set a copious amount of seed, then die. Most varieties have a dormant period where the plant appears to be dead until you inspect the growth bud.

Coromandel, New Zealand — This is a lowland type with leaves 10 to 20 cm tall. It will be dark red in full sun. The plants expect a short, mild winter.

Waihohonu Desert Road (1080 m elevation), New Zealand — This is a highland type with leaves 6 to 10 cm tall. The plants remain dormant longer than the lowland varieties and can survive USDA zone 7 winters outside with protection from freeze-drying. It is an excellent choice for cold climates where it can be grown outside during the summer and stored over the winter in a garage or other cool location.

Drosera binata isn't very picky about soil. It best in the standard 1:1 peat:sand "CP mix". Even better would be 1:2 peat:sand in the top half of the pot. The plants like large pots. Standard #1 ("gallon") pots are not too large. In nature some varieties of these plants send down long rope-like roots to tap water under the sand.

Drosera binata can be started from seed and grown like subtropical Drosera keeping in mind they are really warm temperate. They can also be propagated from leaf cuttings and root cuttings. Please see Sowing Seeds Step-by-Step for more details on starting seeds, the growing guide Growing Subtropical Drosera for more information on growing the plants and the Drosera Leaf Cuttings guide to learn about leaf cuttings. A temperature between 20°C to 25°C (70°F to 80°F) works best for seed germination. Starting plants from cuttings is faster than from seeds. Adult plants are best managed if grown in small pots in trays of water.

Most forms of Drosera binata in cultivation are either sterile, have self-incompatible flowers, or do not otherwise self-pollinate. If the flowers are self-incompatible, you will need to have two unrelated plants of the same type to get seed. That may be difficult to do as most of the common forms are traded around as plants or leaf or root cuttings and are thus clones of the same plant. If the flowers open for two days, the current day flowers may need to be cross pollinated with the previous day flowers. 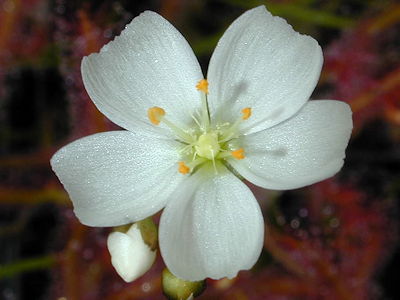 Drosera binata flower from the Coromandel, New Zealand, form. The flower is about 15 mm wide. The flowers of this form are self-fertile and self-pollinate. 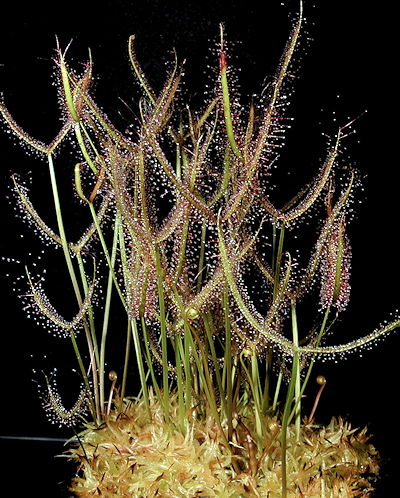 Drosera binata from Tasmania. Under artificial light the plant will get 10 cm tall. In mild winter locations it can be grown outside all year long and will tend to make a 6 cm tall carpet of death in its pot. The flowers of this form do not self-pollinate. 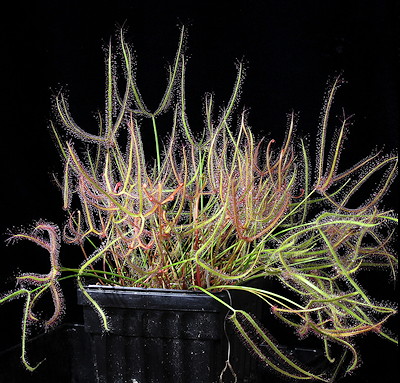 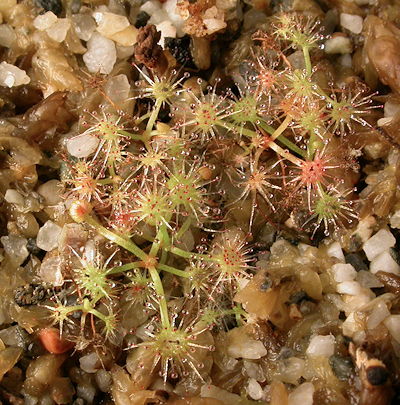 Drosera binata seedlings do not have forked leaves.