There are over 50 species of pygmy Drosera. They are found primarily in southern Western Australia. Two species are found outside that region. The widespread species Drosera pygmaea is found in extreme southern West Australia, south eastern Australia, Tasmania, and New Zealand. The disjunct species Drosera meristocaulis is found only at an elevation of 1700 to 2200 m on the Cerro de la Neblina tepuis in South America along the border of Venezuela and Brazil.

Most pygmy Drosera are generally found in areas with wet winters and dry summers. During the winter and spring the plants grow and bloom. During the summer they go dormant and survive (or not) with only a stipule bud above ground. Their long roots anchor the plant and bring up moisture from deep in the soil. In the fall the stipule buds put out gemmae before the winter leaves. Gemmae allow the plants to reproduce asexually and to spread short distances. Some species such as Drosera pulchella are found in areas that are cooler and wetter in the summer so they don't generally form stipule buds. Drosera meristocaulis grows near the equator at high elevations. It does not produce gemmae.

As the name implies, pygmy Drosera tend to be small plants. Typically they are 15 to 20 mm wide and hug the ground but some of the larger species in the group can get up to 50 mm across and grow 50 mm tall in one season. After a number of years they can get to be quite tall with the stem completely surrounded with dead leaves.

Pygmy Drosera are very easy to grow indoors with or without a terrarium. The ground hugging species are especially spectacular when planted close together as they can make a solid mat of glistening tiny leaves. They do require intense light. A sunny window may not provide enough light. LED lighting is recommended. If the lights are on a constant amount each day, the plants may not bloom or produce gemmae. You may need a light timer with a function that adjusts the on time to local sunrise and sunset.

These plants do well in pots outdoors and in fact will probably do better outdoors than under lights in a humid terrarium. In mild winter areas the plants can be grown outdoors year round. In other areas, the plants can be brought indoors or placed in a greenhouse during the winter. If indoors, make sure they continue under a natural light cycle. When outdoors it may be best to protect the plants from rain and birds. 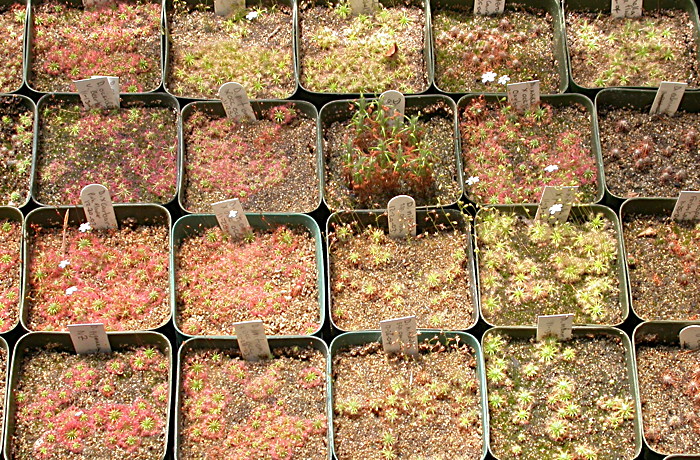 Pygmy Drosera in 8 cm wide by 9.5 cm tall pots growing outdoors under a fiberglass panel. The panel keeps off the rain and the lower light and heat helps keep some of the species from going dormant in the summer.

Pygmy Drosera aren't very picky about soil. However it is best to use a mix that is one part peat to two parts sand or at least that has that much sand in the top 3 cm. The biggest problem with growing pygmies is having them get overgrown with moss. The extra sand helps keep the moss somewhat under control. Growing outdoors in the sun will also help keep the moss down. The plants appreciate strong light and will tend to have more color and bloom more under brighter light.

Most of the pygmy species will produce seeds only if the flowers are cross pollinated with a different clone of the same species or a different species (see Drosera Flower Self-incompatibility for more information). Some will self pollinate. The seeds aren't listed on the Seed Bank site very often because the flowers do not produce many seeds so it takes a lot of flowers to stock the Seed Bank. The hybrids don't usually produce seeds.

Sow seeds on the surface of sandy soil mix using the techniques at Sowing Seeds Step-by-Step. A temperature between 20°C to 25°C (70°F to 80°F) works best for germination. The seeds should germinate in a few weeks. When the new plants have a few true leaves, remove the pots from the plastic bags and put them in a bright terrarium or greenhouse. The seedlings may be a little slow growing at first. Have patience. You can transplant seedlings if they get overgrown with moss but you have to be VERY careful not to break the roots. The tiny plants can have very long roots so it is best if you do not transplant them at all. 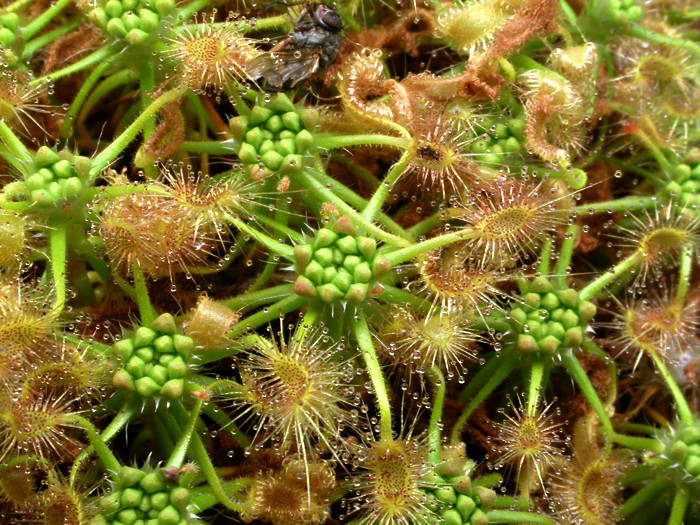 Future generation of Drosera scorpioides in the making via gemmae.

Gemmae are planted the same way as seeds (see Pygmy Drosera Gemmae Step-by-Step). Place the gemmae on the soil surface or bury them very slightly. Mist lightly with water. It is not necessary to place them in a plastic bag but high humidity for the first few weeks is appreciated. Be careful about planting your gemmae too close as it is almost impossible to transplant pygmies without a high mortality rate. They tend to have one long root and do not readily put out new ones if it is broken.

Once the plants are large enough you can try feeding them small insects or get some dried blood worms at a pet shop. The dried blood worms can be dipped in water and placed on the dewy leaves—don't feed a plant that isn't dewy. If the food gets moldy, use less next time. A dab of 70% isopropanol (rubbing alcohol) from a small paint brush will kill the fungus.

If the plants are under a constant light cycle in a terrarium, they will not make gemmae. This could be a problem in reproducing the plants. It is normal to have a certain level of mortality among your plants so you should always be thinking about reproduction. Most growers trade around gemmae each fall to get new species. Some start their collection over from gemmae each year. What ever you do, when your plants are in gemmae, plant the gemmae or give them away. There is only a window of about a month when the gemmae are "good". They dry out and die quickly. 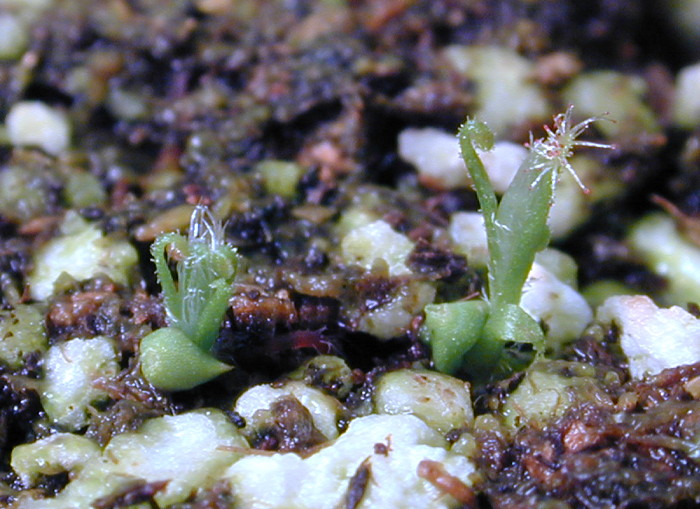 To ship gemmae, put them in a folded piece of moist paper towel in a plastic bag. Use paper towels that you find in rest rooms rather than ones for kitchens. For some reason the rest room kind are less likely to get moldy.

Many gemmae traded around are incorrectly identified. The reasons for this include incorrect ID in the first place or sloppy or lost labels. The most common reason is gemmae migrating between pots. When rain drops hit plants with gemmae, the little plantlets explode out and can travel tens of cm. It is best to protect plants with gemmae from rain. Please see the Guide to the Pygmy Drosera to help identify your plants.

Pygmy Drosera are not exactly plants you grow to impress your non-CP friends. It may take a magnifying glass to see them well. The plants are small. The flowers are small. You grow pygmy Drosera because they are cute and relatively easy to grow for a carnivore. Their small size means you get to put more in a pot. And it is fun to follow them through their seasonal changes.

Guide to the Pygmy Drosera 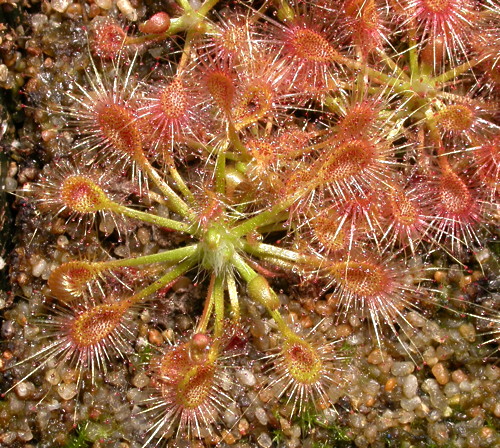 Drosera omissa (was Drosera ericksoniae) is one of the larger pygmies. It gets to be about 30mm across. 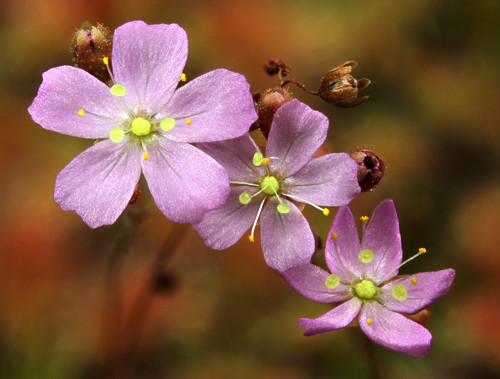 Drosera omissa flowers. This species produces seed when self pollinated and is relatively easy grow from seed. 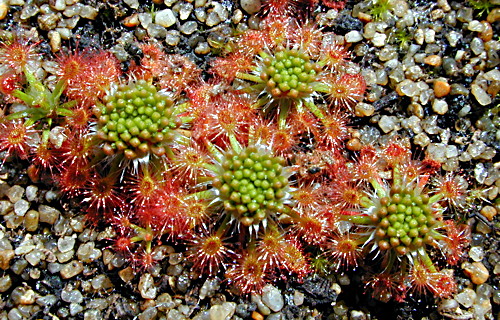 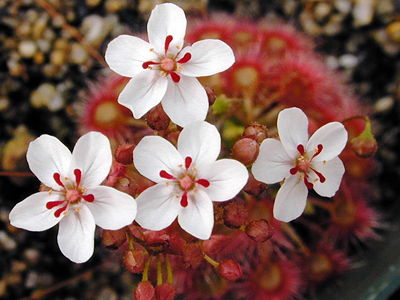 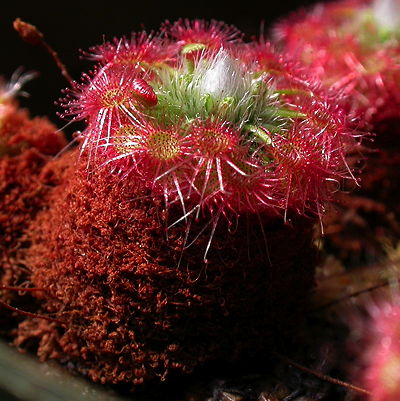 Drosera x badgerupii grown in a terrarium under a constant light cycle for three years. The plants don't go though seasonal changes or produce gemmae without light queues. Like most pygmy Drosera hybrids, it can only be propagated by gemmae. 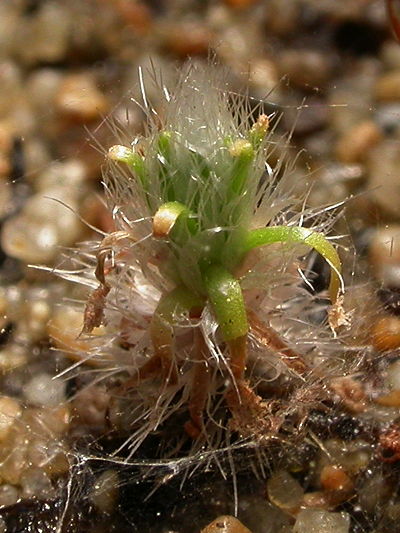 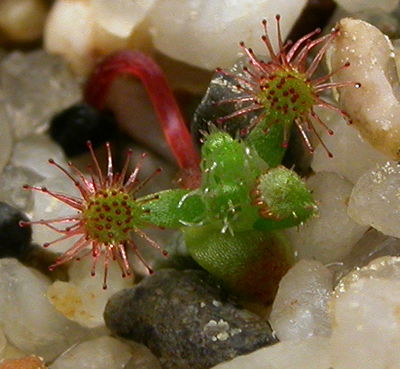 Drosera barbigera plantlet growing from a gemma. Note the red root growing into the sand grains.