Darlingtonia californica is found in seeps, fens, sphagnum bogs, and stream and pond margins in northern California and southwestern and coastal Oregon. It is generally associated with serpentine soil although this is most likely because Darlingtonia can tolerate the otherwise toxic minerals in the soil and its potential competitors cannot. The typical Darlingtonia environment is a slope with cold water flowing through on the surface or just below. The plants may also be found on protected dripping cliff faces and semi-aquatically on pond and stream edges. The exposure can be from hot lowland south facing to cool highland north facing. The plants enjoy full sun but are quite commonly found in partial and even dense shade.

You would think that with the wide range of exposures in the wild, the plants would be easy to grow. For most people they are not. What all or almost all the wild locations have in common is cold spring water constantly flowing through the habitat. The difficulty growing the plants in captivity is keeping the roots cool during warm weather. If plants are going to collapse and die, it usually happens during hot weather and if there is a large clump of plants in a pot, the collapse starts with the growth points at the edge of the pot. To grow Darlingtonia long term you absolutely have to keep the soil temperature below 27°C (80°F). There are clones that tolerate somewhat higher temperatures.

Jeff Dallas of Sarracenia Northwest has an excellent video about Darlingtonia in the wild called Serpent of the Siskiyous. In the video Jeff visits the famous but atypical Darlingtonia Wayside on the Oregon coast and a more typical complex seep/stream/fen location in Josephine County, Oregon. He compares the physical attributes of each site and how that would relate to growing Darlingtonia. He measured quite warm soil temperatures and high pH at the Josephine County site.

The Seed Bank has offered coastal Oregon seeds but usually the seeds are from plants of unspecified locations or known non-coastal locations. Gasquet, California, is near the coast but not considered coastal in climate. The Darlingtonia populations around Gasquet show much more form, color, and size diversity than populations in other parts of California. Populations at moderate elevation inland sites like many in Josephine County may be more tolerant of heat. 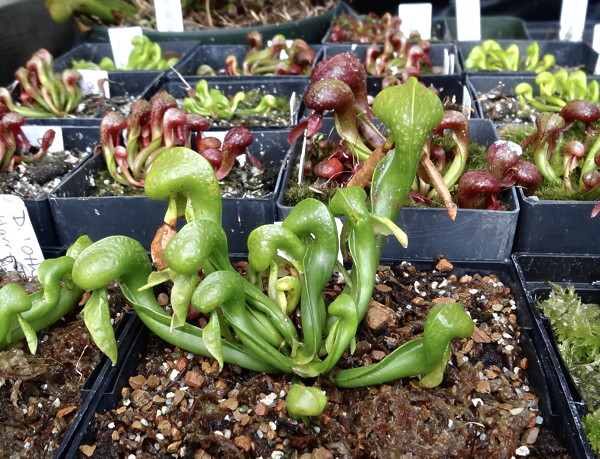 Darlingtonia californica 'Othello', an anthocyanin-free cultivar found in Nevada County, California at 1750 m (5800 ft) elevation. This 5 year old plant is in a 10 cm (4 in) pot. The longest pitcher is 8 cm. Curiously this high elevation plant puts on a round of pitchers in the fall when grown in a milder climate.

Darlingtonia seeds need a damp cold stratification for 4 weeks before they will germinate. If you plan on keeping the plants in a terrarium for an extended period, you may start the seeds at any time. For plants to be kept outside it is best to start the seed in the fall if you plan to keep the seedlings under lights the first winter or plant in late winter if they will be put outside in late spring. If you live in an area where Darlingtonia can be grown outside unprotected year round, consider starting the seeds in pots outside during the winter. 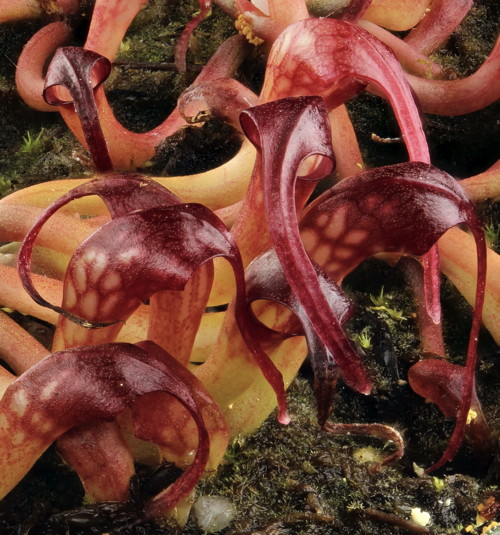 There are a number of methods you can use for germinating and growing seedlings. Since the plants will spend 2 to 4 years in the seedling pot it is best to use a pot and soil that will last that long. A good soil mix to use is 60% washed peat moss and 40% coarse sand blasting sand. 100% peat moss and a finely chopped Sphagnum/sand mix also work well. Washing or rinsing the peat or Sphagnum helps remove excess salt, sulfur compounds, and moss spores.

Sow the seed on the soil surface or spread the moss and seeds from the stratification bag on the top of the prepared seedling pot with your planting spoon (yes, old dinner spoons and knives are useful). You want the seeds about 5 mm apart although you can transplant the seedlings to that distance later. Seeds may be covered with a few mm of sand. The thin layer of sand on the surface can help discourage fungus gnats from laying eggs. I prefer to grow the plants under LED lights for a few years. It is best to have the pots under 100% humidity in a plastic bag or to spray them with water regularly until the seeds germinate. Please see Sowing Seeds Step-by-Step for more details on starting seeds.

Darlingtonia do not require as much light as Sarracenia but they do appreciate strong light and do prefer full sun if it is not too hot. Under lights give them as much light as you can again without making the plants too hot although seedlings do seem more resistant to heat than blooming size plants.

Unfortunately, unlike Sarracenia, it appears soil fertilizing Darlingtonia is not helpful. There are conflicting reports about whether seedling Darlingtonia are able to utilize nutrients in soil. You can check this under your conditions by growing half your Darlingtonia seedlings with soil fertilization and half without. Insensitivity to soil nutrients is how Darlingtonia survive in otherwise toxic soil in nature. Darlingtonia also have so little leaf surface foliar feeding is difficult. I do not know how to speed up the first three years of the process of getting mature plants from seeds. Once the plants have pitchers large enough you can put very dilute fertilizer in them to help the plant along. Harry Tryon who lives where Darlingtonia grow naturally grows hundreds of plants in plant trays but still needs 3 years to get plants large enough to plant out individually.

Once you do get plants large enough to pot out individually, the kind of soil you use depends on your expected high temperatures, whether you have a greenhouse or have the plants outside, what kind of water you have, and what is convenient in the long run. In the wild I have seen Darlingtonia growing in decomposed leaves or peaty soil over gravel or rock, in Sphagnum mats, and directly in rocks or gravel. In all cases water was flowing slowly through the substrate. In captivity that is hard to copy. I have seen mature Darlingtonia growing nicely in captivity in pure live sphagnum moss not sitting in water but watered every day. I have also killed Darlingtonia in live sphagnum.

The soil mixes that seem to work best for mature plants are ones that do not become stagnant or stinky. Harry Tryon uses a "kitchen sink" mix of 2 parts chopped long fibered North American Sphagnum moss, 1 part peat moss, 1 part fine orchid bark, and 2 parts washed pumice. Jeff Dallas recommends 1 part peat moss, 1-2 parts perlite or pumice, and 1 part orchid bark. For small plants I use 2 parts chopped Chilean sphagnum moss to one part coarse sand blasting sand. For large plants I will also throw in used CP mix, perlite, peat, aquatic planting media (a.k.a. aquatic plant soil or APS), and/or orchid bark. The important point is to have a soil mix that retains lots of water but is still loose enough to breathe. I use tall pots constantly sitting in a few cm of water or that retain water internally. Harry uses short pots for small plants but very large pots for mature plants. He keeps his plants constantly sitting in water as well. We top water every morning. Mine is all automatic. Jeff recommends large wide pots not sitting in water but waters his plants one or two times a day. The looser the soil mix the more often you have to top water the plants. 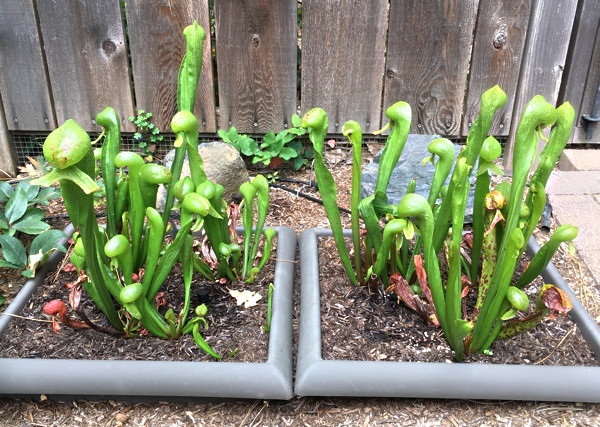 Darlingtonia growing in large pots in the ground. The pots are in the shade so the ground stays cool during the summer.  The pots are automatically watered every morning.

The pots hold water but have a drainage pipe to keep the level about 20 cm below the soil surface. The pipes drain downslope in this case but could drain into a gravel dry well under and around the pots. The sand is to keep the soil mix from clogging the drain.  In this case two pots are hooked up to one anti-siphon.  Next time I would use "T" fittings with pipe extending above the soil surface in the pots instead of elbow fittings in the pots to prevent siphoning and not use an external anti-siphon.  The pipe would allow testing water levels in the pot. 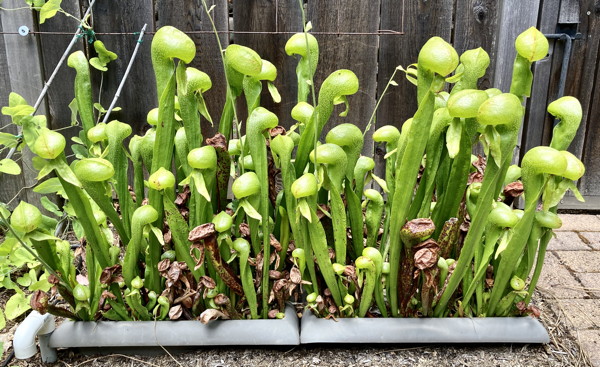 The plants 3 years later. They are in need of dividing during the coming winter.

It has been suggested that since Darlingtonia is associated with serpentine that using serpentine gravel in the soil mix is of some benefit. There is no evidence Darlingtonia cares specifically what it is growing in as long as the oxygen levels are high enough and the temperatures are low enough.

I can not emphasize this enough: top water the plants regularly and if you have automatic watering do it during the early morning when the water is coolest. Many members put ice cubes of pure (distilled or reverse osmosis) water on the soil surface every day during hot weather. Others pump cooled water into the pots or float the pots in deep trays of water to maintain constant temperatures. Whatever you do, larger pots will be a more stable environment. Pots in the ground or in-ground bogs are best if your soil temperatures remain low enough in summer. Air temperatures and humidity are not major issues as long as the roots are cool.

Darlingtonia can take being frozen solid if they are fully dormant and the rhizomes are not exposed. If you live where it freezes hard for weeks at a time, the plants may need protection in a cold greenhouse, cold frame, garage or a deep layer of pine needle mulch or snow to limit freeze/thaw cycles.  Plants with a high elevation heritage are more cold tolerant but less heat tolerant.

Darlingtonia are tough plants but they do have an Achilles heel. It is well worth the effort growing them if you can provide the conditions they enjoy. 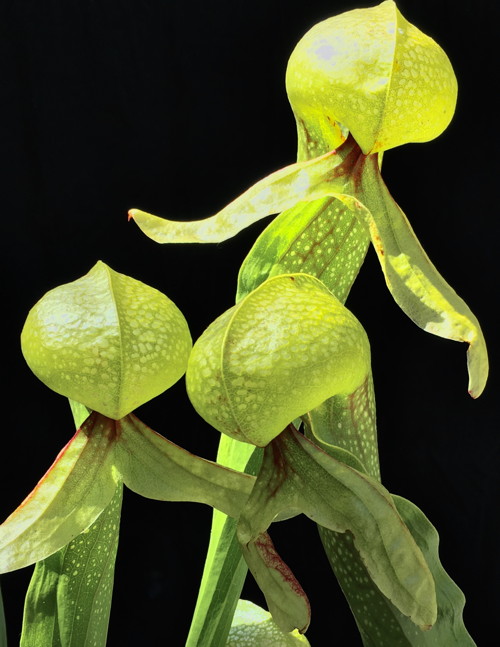 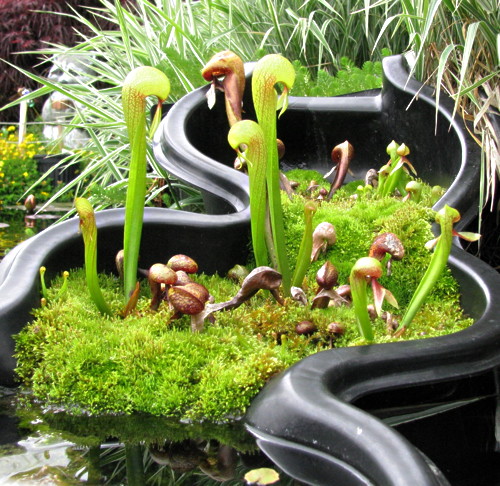 Darlingtonia californica growing in a water feature. The plants did very well here until raccoons trashed it. Sphagnum moss is a raccoon magnet. Photo by Djoni Crawford. 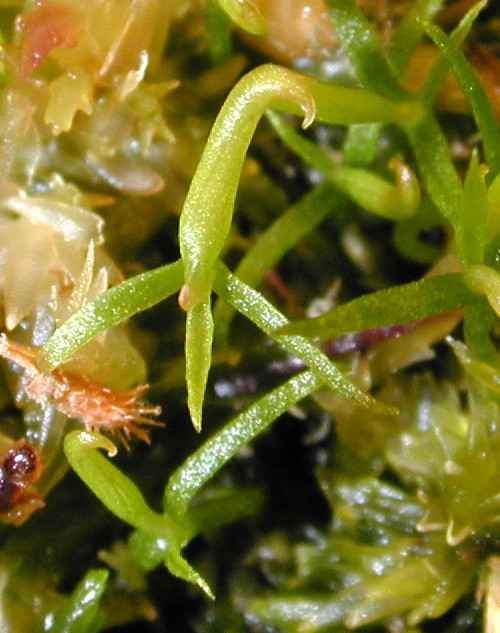 Darlingtonia californica sprouts. The non-carnivorous cotyledon leaf on the left still has the seed attached. The first carnivorous leaves already look wicked. Note the first true leaves is not of the carnivorous type! There you see a remnant leaf from its ancestors. 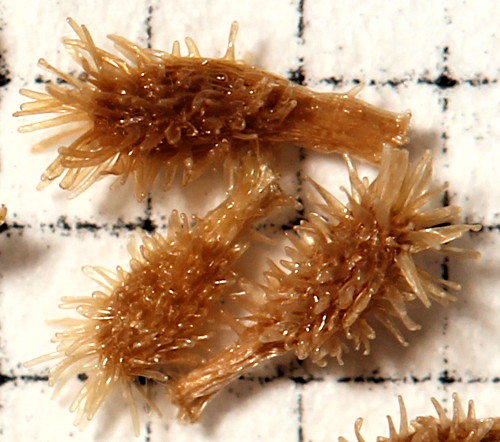 Darlingtonia californica seeds. The grid is 1mm. The emergences from the seeds help them to get caught in fur as well as microfiber clothing. 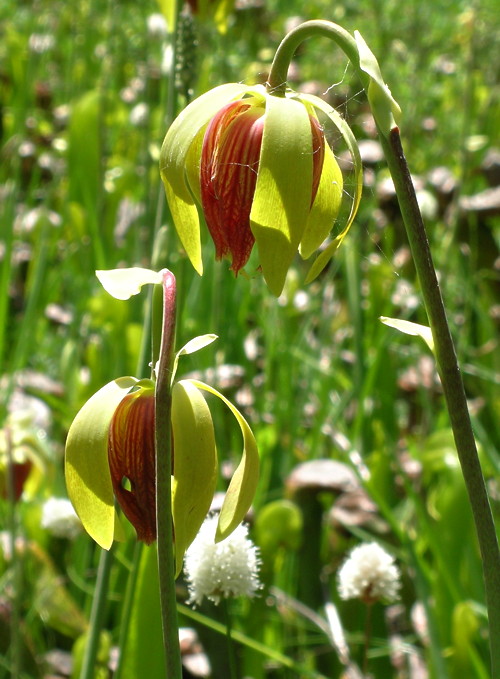 Darlingtonia californica flowers. In their natural habitat the flowers are pollinated by small sweat bees. 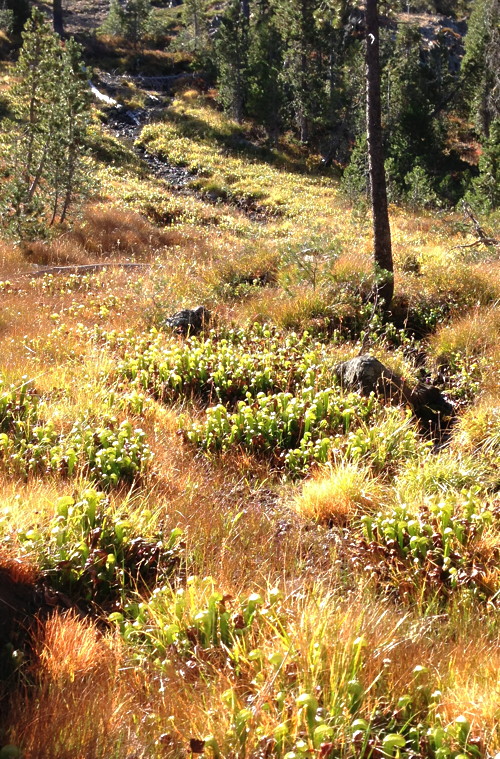 Darlingtonia growing on a steep hillside seep at 2000 m (6500 ft) elevation, Siskiyou County, California. There is a spring in the upper left corner of the photo. The "soil" is serpentine gravel.