Drosera burmannii is found in northern and eastern Australia, India, China, Japan, and south east Asia. There are various forms that range in size from less than 1 cm to about 3 cm across and may be golden green, dark green, green with red tentacles or all red. The scapes (flower stalks) tend to be greater than 10 cm long and bend at the base. The species is described as having white flowers but at some locations it has pink flowers.

Drosera sessilifolia is found in Brazil, Guyana, Venezuela and possibly N Argentina, Paraguay, E Bolivia, E Peru, SE Colombia, French Guiana and Surinam. The plants from seeds distributed by the Seed Bank tend to be 1 to 2 cm across, are not as flat in aspect as Drosera burmannii, and tend to be golden green with red tentacles. The scapes tend to be 5 to 8 cm long, do not curve at the base, and have pink flowers.

Please compare photos of Drosera burmannii and Drosera sessilifolia in the wild at the Carnivorous Plant Photo Finder (photos of plants in captivity may not be correctly identified). You will note the tremendous variability of these plants in the wild. Some of that variation may not show in plants grown in captivity. However it appears in general Drosera sessilifolia has wider and shorter petioles with rounder laminas than Drosera burmannii. Because some Drosera burmannii varieties have pink flowers you can not use flower color as a diagnostic character to distinguish the species.

These small plants makes an excellent addition to CP collection. In fact it makes a wonderful weed if you aren't careful.

In the wild Drosera burmannii and Drosera sessilifolia generally grow as annuals. This means under normal circumstances within one growing season they will grow quickly, bloom, set seed and die. The seeds sprout with the onset of the next rainy season and require warm and bright conditions to do well. The plants bloom and then die as the ground dries out.

There are locations in nature where Drosera burmannii survives for multiple years and Drosera sessilifolia is capable of this as well. You can maintain both species a number of years if you remove the flower stalks as soon as you notice them, keep the plants in their ideal circumstances of heat and light, and repot them about every three years after the mat of old leaves gets thick enough to interfere with new roots. Since it is difficult to clean up and repot the plants without some losses, it is best to allow some of the plants to bloom. When you allow them to bloom, the plants may be reduced in size substantially and have difficulty recovering if you have not been feeding them regularly. Feed them to keep this from happening. If the plants are in a terrarium that fogs, the plants should probably be removed or moved to a drier terrarium so the capsules don't get moldy.

Drosera burmannii and Drosera sessilifolia plants can be started from seed and grown like other subtropical Drosera. A temperature between 20°C to 25°C (70°F to 80°F) works best for germination of Drosera sessilifolia; Drosera burmannii might prefer a few degrees warmer depending of source location. Please see Sowing Seeds Step-by-Step for more details on starting seeds and the growing guide Growing Subtropical Drosera for more information on growing them. Adult plants are best managed in small pots in trays of water. They do very well under a constant light cycle in terrariums at typical human house temperatures.

Drosera burmannii and Drosera sessilifolia are generally not propagated by root or leaf cuttings. The plants do not have the more robust leaves and fleshy roots typical of the typical perennial Drosera species. 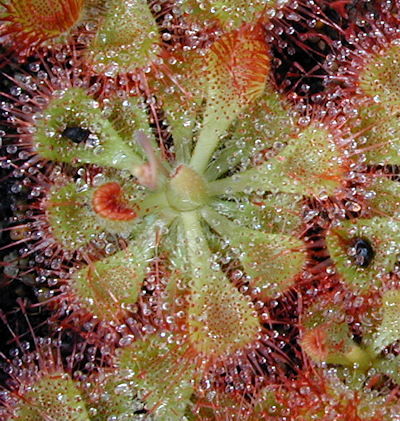 Note almost all the tentacles of Drosera burmannii 'Pilliga Red' are red. These plants were grown in a greenhouse.

Drosera burmannii 'Pilliga Red' is from the area of Pilliga Nature Park in inland New South Wales, Australia. It is a beautiful plant but a little more temperamental than the all green form from Beerwah, Queensland, Australia. Make sure you allow enough plants to bloom to collect seeds for next year as it more likely not to survive if the temperatures go much below 16°C. 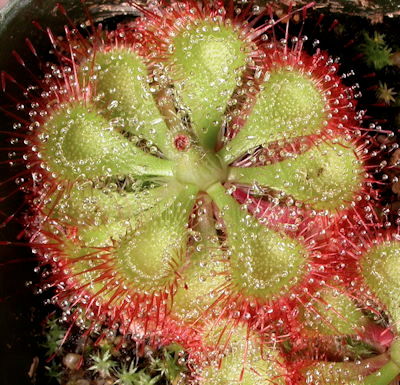 This is Drosera burmannii from Evans Head, NSW, Australia. Note only the snap tentacles are red. The old leaves also turn bright red: 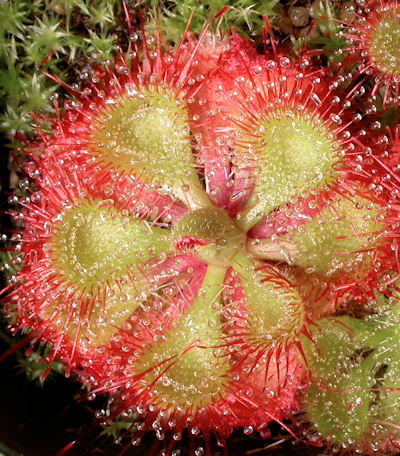 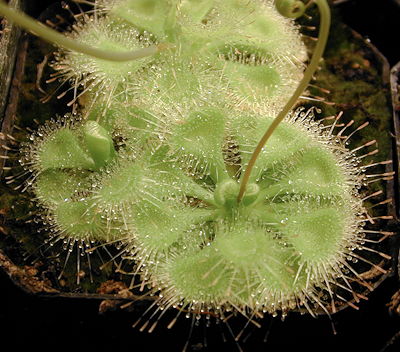 Drosera burmannii from Beerwah, Queensland, Australia. These plants are 2 cm across. 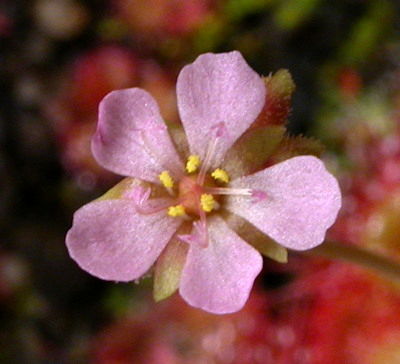 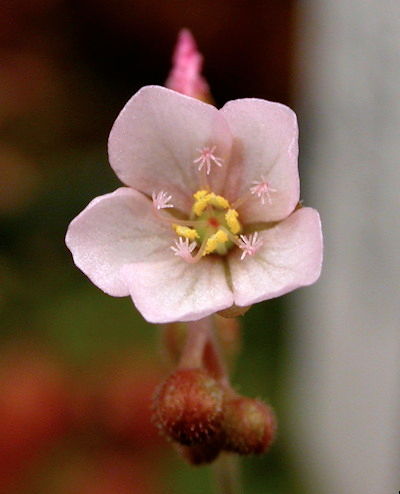 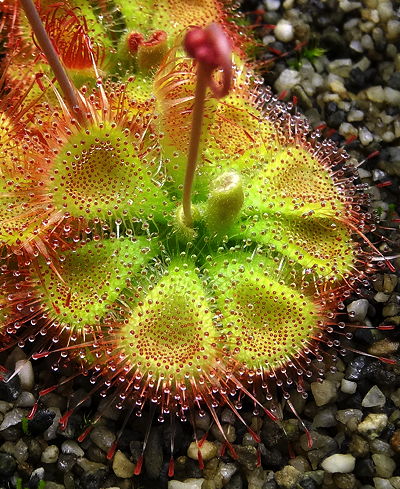 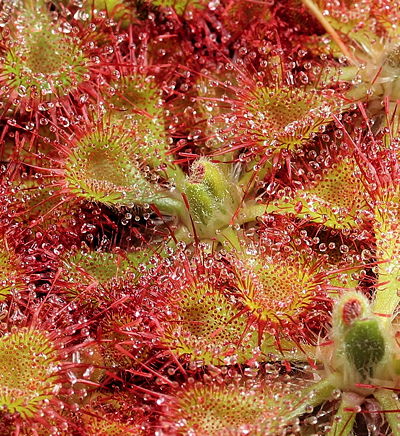