Tuberous Drosera are native to Australia, Tasmania, New Zealand, Asia, and Pacific islands. A few species like the ones in the Drosera peltata-complex and Drosera macrantha-complex are widespread but most are narrowly endemic to the state of Western Australia. Tuberous Drosera in Australia, Tasmania, and New Zealand live in areas where winters are mild and rainy while summers are hot and dry. The tubers sprout in early fall and begin vigorous growth with the first rains. By late spring the plants have bloomed and they die back to the underground tubers to survive the summer in warm barely damp soil.  Species found north of Australia time their growth to the rainy season which may be summer or any particular time of year. 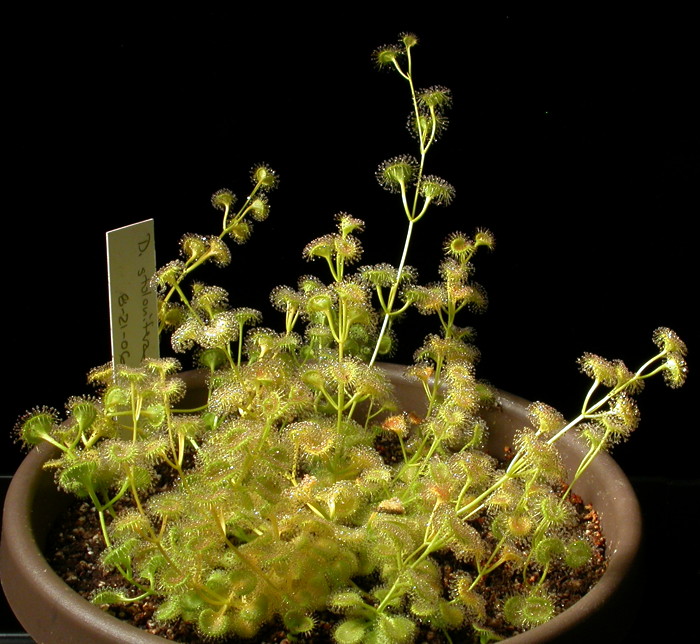 Most tuberous Drosera are quite challenging to grow unless you can provide their exact requirements. The Drosera peltata-complex species, Drosera stolonifera-complex, Drosera menziesii, and a few others are the most forgiving of adverse conditions and recommended for beginners. As long as the plants are kept cool and get lots of light, they are very tough and easy to grow. Most can take light frost. But temperatures above 25°C (78°F) can cause them to die back and will kill seedlings. If the plants have not built up enough nutrients in the tuber to recover from the warm temperatures, the plants are history.

Most tuberous Drosera do NOT make good terrarium plants. They get too large, do not need the high humidity, and terrariums tend to get too warm. If you live in a so called Mediterranean climate you should grow tuberous Drosera outside all year. If you live in a colder climate and your house is cool enough you can grow the plants under lights. LED lights are best because they are not hot like fluorescent lights. Or you can grow them in a garage or basement under whatever lights you have. Keep the light cycles natural with a timer that adjusts daily to celestial time. 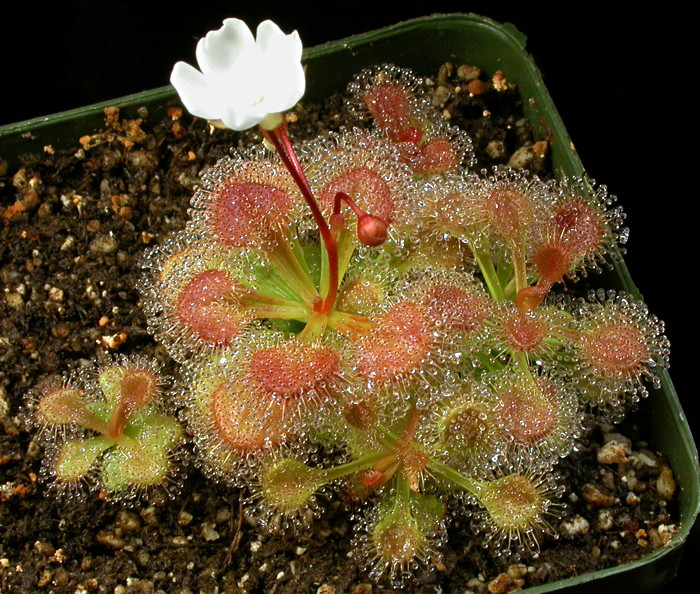 Drosera whittakeri is a small species that will fit in a terrarium but you still must give it a natural light cycle and it may want cooler temperatures than your house at night. This plant is in an 8 cm (3 1/4 inch) pot.

Most tuberous Drosera species have self-incompatible flowers. That means you have to have two sufficiently unrelated plants booming at the same time in order to get seeds. Generally you can tell the self-incompatible species because they have large showy flowers that open multiple days.  You will need to hand pollinate these species unless the plants are outside and you have small native bees active.  If your seeds came from the ICPS Seed Bank, the source plants may be a few generations from wild and be sufficiently inbred that you will get very few seeds even if you hand pollinate the flowers. If you bought a single plant, forget about seeds. Some species such as Drosera auriculata, Drosera peltata, Drosera hookeri, and Drosera bulbosa have flowers that are able to self pollinate.  There are other species with small, simple white or pink flowers that only open only one day that likely have self-compatible flowers as well.

Winter growing tuberous Drosera seed MUST be planted in summer or early fall. If you plant them any other time, the plants will get confused and my not be able to form tubers before they go dormant. The seed of some species germinate best if they have experienced a period of warm stratification in damp soil. In the northern hemisphere this means you must plant the seeds by the first week of August (down under that would be February). The soil surface needs to be kept damp during stratification. Cold stratification such as is used for Sarracenia and temperate Drosera is NOT effective with tuberous Drosera. I cover the seed with about 2 mm of pure sand with grains large enough that the sand does not form a hard crust.

Drosera hookeri, Drosera auriculata, and Drosera macrantha do not require the warm stratification and will germinate if planted by the first week of September (March in the southern hemisphere) or if grown inside and kept in a 10°C to 20°C (50°F to 70°F) temperature range until you get germination. The seeds appear to require cycling temperatures or temperatures in the middle of that range to germinate. Expect the seeds to start germinating in October and November (April and May in the southern hemisphere). Seeds planted late may germinate in the spring. Depending on your growing conditions this will likely end in tears as the temperatures could get too warm and the seedlings not live long enough to make tubers.

Some tuberous Drosera species with hard seeds germinate better if the seeds are scarified before planting. These species include Drosera stolonifera and Drosera gigantea. Please see the page on Drosera seed scarification for more information.

Tuberous Drosera require very deep pots and the plants cannot be transplanted when growing because their roots are very long and very fragile. Use 16 cm deep nursery #1 ("gallon") pots to start seeds. A 1:2 mix of peat and sand with some sphagnum moss or weed block cloth in the bottom blocking the drainage holes works well. Let the pots sit in about 2 cm of water. In mild winter areas you may leave the pots outside protected from rain and let nature takes its course. In other areas you may start the seeds in a greenhouse that allows the temperature to get down to a few degrees above freezing at night. The perfect location is in the trays with your Sarracenia plants.

If the seeds don't germinate the first winter, do not throw out the pot! Let it dry out during the summer and try again the next winter. These plants require some patience.

After the seeds germinate, the challenge is to give them enough light at cool temperatures to produce tubers sufficiently large to get the plants going again the next winter. Most species appreciate a foliar feeding with half strength foliar fertilizer every two to three weeks. Only mist the leaves; do not fertilize the soil. You may also crush freeze dried bloodworms and carefully put some on the leaves dry—test a few leaves before doing them all.

Do not force the plants to go dormant unless they are blooming size and have been growing 6 or 7 months. This is especially important for seedlings. If there is a heat spell in the spring, put them in a cool location to delay dormancy as long as possible.

When the plants do die back, let the pots dry out. For most species you can let the pots get completely dry if they are stored in a humid location out of the sun. Drosera gigantea and Drosera sulfurea should never be allowed to dry out completely. A technique for storing the pots with tubers over the summer is to allow the soil to become just damp and then put the pots in plastic bags or in a terrarium in a shady location or under a greenhouse bench where is does not get dripped on. A terrarium with gravel and some water in the bottom works best as it is easy to keep an eye on the pots and to check for new growth in the fall. A good time to put them back in water trays is early August.

The only time you can transplant tuberous Drosera is when they are dormant and in the tuber form. If you are getting too many plants in a pot, carefully dig up some of the tubers a month after they die back and put them in new pots at the same depth they were originally at in the old pots. They are usually 5 to 10 cm deep but can be just above what was the water level. Don't throw out the soil in the top 10 cm of the pot unless you also want to throw away small tubers. Don't wait until the fall to do the transplanting as many species try to get a jump on winter by sending up a sprout to just below the soil surface in late summer. Do enjoy these wonderful ephemeral plants! 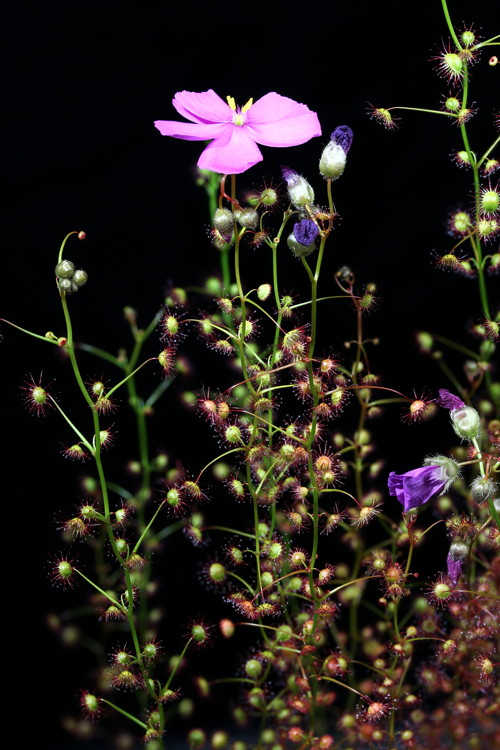 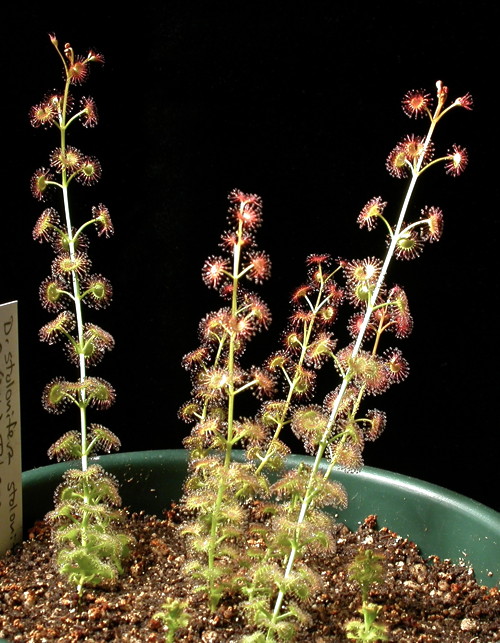 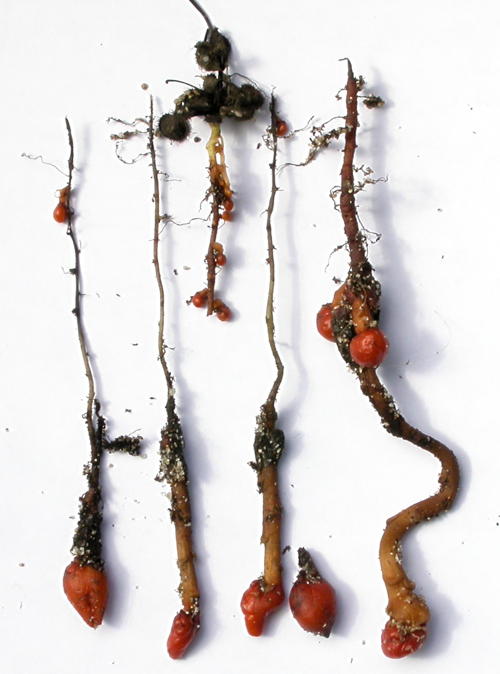 Drosera rupicola tubers dug up too early. If you have lots of them it is fun and interesting to dig them early and watch the tubers form. Tuberous Drosera have thick roots while growing and the tubers are formed after the top and leaves die back and while the roots shrivel. 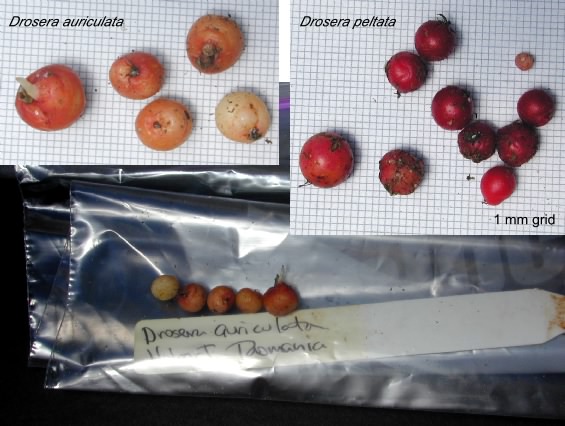 Tubers may be stored in plastic zip-lock bags in a dark location. Plant them with the "eye" up. You may find it easier to maintain mature plants if the top 3 cm of the soil is pure sand.