Species of the Drosera indica complex are found in Africa, Australia, India, southeast Asia, and eastern Asia as far north as Japan. The plants are annuals and tend to grow quickly then bloom themselves to death. They are naturally found along ephemeral creeks on sandy soil and in seasonal swamps.

There are three widespread species in the complex:

Drosera indica is found across west to southeast Africa, Madagascar, India, and southeast Asia to China and Japan. It has not been found in Australia. Plants can be green or red and flowers can be white, pink, or purple.

Drosera serpens is found in northern and northwestern Australia, southeast Asia including China, Vietnam, and Philippines. It is very similar to Drosera indica except the stem has unique yellow "bowler hat" glands on red stalks and the petioles have "Y"-shaped non-glandular appendages.

Drosera finlaysoniana is found across central Australia, Vietnam, Laos, Taiwan and China. It differs from Drosera indica in not having petioles. That is the long stalked digestive glands cover the entire leaf.

Most, if not all, "Drosera indica" seeds sold by the ICPS Seed Bank were Drosera finlaysoniana.

There are an additional eight species only found in the Kimberley region and adjacent Northern Territory of Australia. Drosera hartmeyerorum is the only one of these species to be available on the ICPS Seed Bank so far. It is like a red Drosera finlaysoniana with "runway lights" at the base of the leaves. Please see The Drosera indica complex for more information the taxonomy of this group.

Species of the Drosera indica complex grow in tropical and subtropical locations with distinct wet and dry seasons. In nature the seeds sprout with the onset of the rainy season. The plants require very warm and bright conditions to do well. There is a lot of variability in the soil and watering requirements for these species. Some actually grow in water while others need drier conditions. In particular, Drosera finlaysoniana does not do well in the typical sopping wet peat mix used for bog plants. A soil mix of mostly or even complete sand works best. Some people have told of success using an airy mix of peat and perlite. Sow the seeds on the surface and put the pot in a very warm and bright location. I put pots with seeds in a plastic bag under florescent lights until the plants get a few true leaves. A temperature about 25°C (80°F) works best.

When the plants get to a few cm tall, Drosera finlaysoniana tends to prefer drier soil and can die if the plants are too wet. However watch your plants carefully. There can be major differences in preferences depending on the source location of the seeds. For some you can even allow the pots to go almost dry between waterings. Plants native to other locations may require constant wet conditions.

Drosera finlaysoniana is an annual and it has been reported it never reproduces from root or leaf cuttings. You may prolong its life by cutting the top off and re-rooting. This does not always produce a healthy plant. It is best to start over again from seed. The plant is a strict annual and will die after setting seed. When you grow them you should always be thinking about getting enough seeds to make sure you will have the plants again next year.

About Carnivorous Plants: Evolution of the Caryophyllales Carnivores 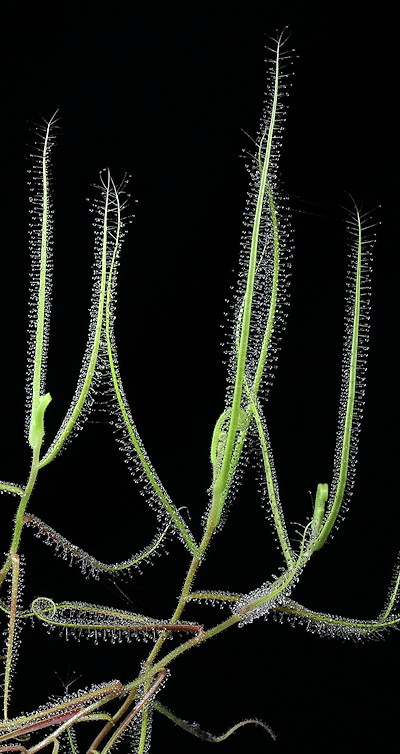 Drosera finlaysoniana grown under lights in a terrarium. The plants can be large and sprawl over other plants. 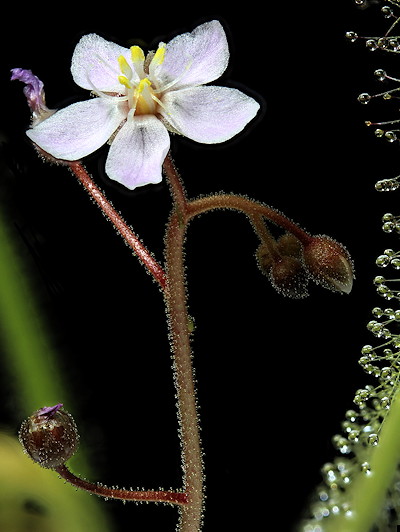 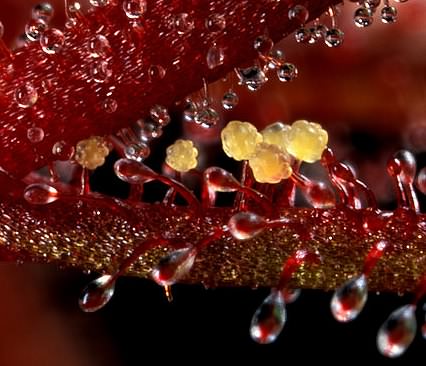 A close up of the runway lights on Drosera hartmeyerorum. This species is found near Kununurra, West Australia, Australia. (photo: ©Barry Rice/sarracenia.com)