Drosera regia is the most spectacular of the easy to grow Drosera. Grown outside or in a very bright greenhouse the leaves can easily be 45 cm (18 inches) long. The flower spikes are usually a little taller than the leaves and have large flowers. The plants can also be grown as large terrarium specimens. They tend not to get as tall or bloom under artificial light.

In the wild Drosera regia is or was found at two locations in the Bainskloof Range in South Africa near Cape Town at 500 to 900 m (1600 to 3000 ft) elevation. The locations are very like Darlingtonia sites in the mountains of California and Oregon; essentially hillside seeps with water flowing though the soil. This may keep the roots in a constant cool or moderate environment year round. The plants grow in full sun but because of the altitude they tend to get mild days and cool nights. In the winter the plants form loose hibernacula. The soil is wet peat and gravel with small shrubs and very dense rush-like vegetation. With the dense vegetation this is not your typical Drosera habitat and this is not your typical Drosera.

Based on taxonomic characters and DNA analysis it is apparent that D. regia has no known closer relatives than Dionaea muscipula, Aldrovanda vesiculosa and Drosera arcturi. It has even been proposed Drosera regia be removed from the genus Drosera because is it so unlike other Drosera except it looks like one. Knowing this heritage is important to a discussion about growing D. regia because in essence you can not assume you can grow it like you grow other Drosera.

Drosera regia can be grown as if they were Sarracenia, including soil fertilization, as long as they have some heat protection in very hot weather and freeze protection in very cold weather. In USDA climate zone 9 and warmer the plants can be grown outdoors year round. They survive light frosts quite well if they have formed hibernacula. The plant will come back from roots if the main growth point is killed by an unusual light freeze. In areas with real freezes like zone 8 and colder the plants will need serious protection in the winter. I live in zone 7 and have my mature plants in a garage window with supplemental lighting 5 to 6 months of the year. A heated greenhouse also works.

For me Drosera regia does best in a light soil mix and appreciates large and tall pots. I have grown it in both long fibered sphagnum loosely packed into a pot and in peat with 50% sand or perlite. Many growers use a higher proportion of sand or perlite. I put the pots in water trays and under those conditions the plants need to be in tall pots. For mature plants growing outside or in a greenhouse, #1 (16 cm diameter by 18 cm tall) nursery pots are not too big. Small plants indoors under lights do well in 9 cm tall pots. Other growers allow the water trays to dry out between watering and/or use clay pots. All of these work because it appears that although the plants require wet conditions, they seem not as tolerant of anaerobic soil conditions that would be just fine for most Drosera and Sarracenia. The roots may also be sensitive to heat. It would be best to try different methods to grow the plants to find out what works best in the condition you can provide.

Unlike every other Drosera species I know about, Drosera regia appreciates soil fertilization. If you do not soil fertilize your plants and they are not naturally getting a lot of prey you will need to very regularly foliar feed the plants with dilute liquid fertilizer or live insects or dried blood worms. If you neglect to feed the plants they will decline and eventually die.

For me it is too much bother to foliar feed Drosera regia as much as it needs in nutrient-free soil. It does not take much fertilizer in the soil to make the plants happy. I use 4 to 6 high nitrogen Osmocote™ pellets per plant or pot each spring. The amount of fertilizer needed is more than most Drosera can tolerate. Even the fertilizer leakage from the pots into a shared tray can be detrimental to other Drosera and Dionaea.

The easiest and best way to propagate Drosera regia is via root cuttings. Any time I transplant a plant I take some of the older roots for cuttings. I put 2 cm long pieces of roots about 1 cm below the surface of a pot loosely filled with long fibered sphagnum. Some growers use covered clear plastic containers and essentially float the roots over some long fibered sphagnum in water like you would do for leaf cuttings. When the new plants have a few leaves about 2 to 3 cm long I transplant them to a peat/sand or peat/perlite mix with a few Osmocote™ pellets per pot to get them going. I do not know why this species is not more readily available as I find them very easy to propagate and grow from root cuttings. It has also been reported they can be reproduced from leaf cuttings floating in water. Leaf cuttings on soil tend to rot too quickly.

Drosera regia are reported to be difficult to grow from seed. I think they are the easiest Drosera to start from seed. I use my standard techniques at Sowing Seeds Step-by-Step with a soil mix of sand and chopped long fibered sphagnum under lights. The seeds germinate easily in a few weeks without stratification.

There are reports of people having trouble with the seedlings dying after the plants have a number of true leaves. Some growers believe this is the result of damping off fungus. Usually damping off fungus kills seedlings earlier and I would think most bog/fen plants should not be susceptible to a wet fungus. In my experience, the seedlings decline because they are starving to death. I tried leaf feeding with hydrated dried blood worms (fish food). It helped but was not easy for the smaller plants. Putting 5 Osmocote® Outdoor & Indoor Smart-Release® Plant Food (19-6-12) pellets into the soil of the 8 cm wide pots saved the plants. I would wait to put the pellets into the soil until after the plants have 4 true leaves to minimize the growth of moss and cyanobacteria. With 4 true leaves the plants will be large enough and grow fast enough not to be bothered even by moss. With that much fertilizer it is best not to grow Drosera regia in the same water trays with other Drosera. I grow them with my Sarracenia seedlings which get the same amount of fertilizer. 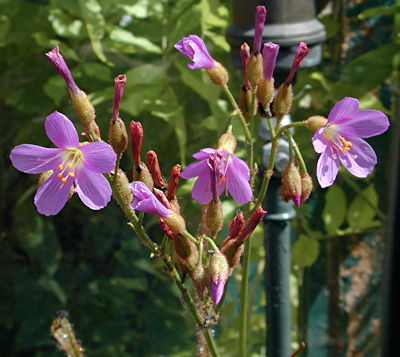 Drosera regia flowers. The flowers are self fertile but the stigmas and anthers mature at different times. You need two flowers open at the same time to successfully pollinate them. To quote Lois Ochs: use "yesterday's pollen on today's stigma". 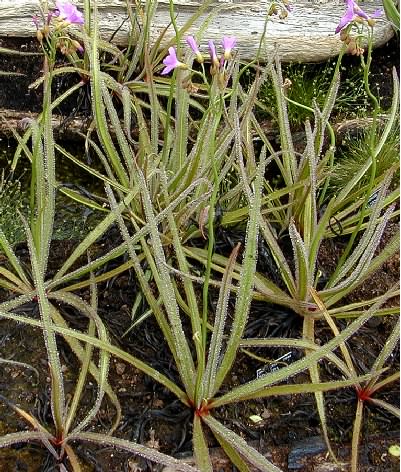 Drosera regia growing in an display greenhouse at the Jardin Botanique, Parc de la Tête d’Or, Ville de Lyon, France. You can not get plants this size just feeding them an occasional bug. 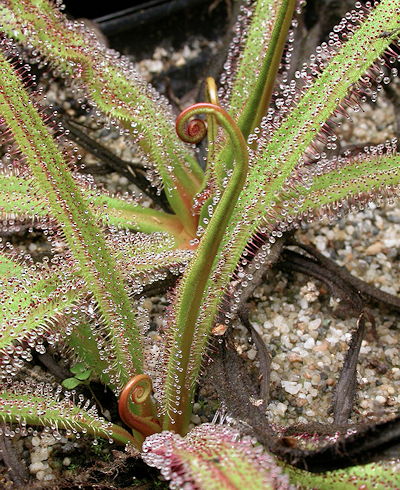 Drosera regia plants are in their winter home under lights. During the summer they live outside in full sun and get fertilized with Osmocote™ pellets in the soil. They have a 1 cm sand mulch over a peat and sand soil mix in #1 nursery pots (commonly called "gallon pots" although they hold nowhere near that amount). 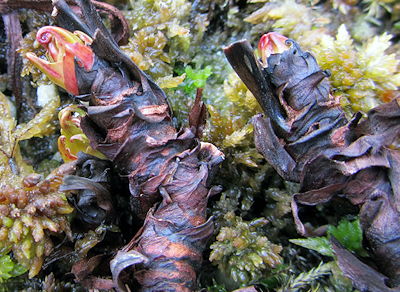 Drosera regia rhizomes with hibernacula during the winter outdoors in northern California. Photo by Gary Kong. 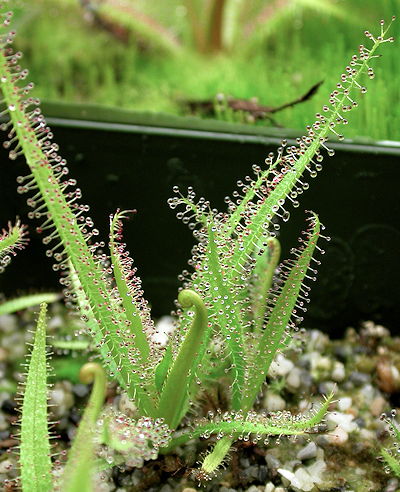 Drosera regia seedlings. These plants were on the verge of starving to death before being fertilized with high nitrogen Osmocote™ pellets.