The two species of Roridula—R. dentata and R. gorgonias—are among the most impressive of carnivorous plants, eventually becoming shrubs up to two meters high, with lovely pink flowers, and tufts of hairy, sticky leaves that are reported to snare the occasional bird in the plants’ South African habitat.  They are also among the most recalcitrant of carnivores in cultivation, recommended only for experienced growers, especially those with access to an airy greenhouse that gets brilliant sun (or who live in the Cederberge, in South Africa).

The first hurdle to overcome for would-be Roridula growers is convincing the seeds to germinate.  The best time to start the seeds is early autumn, when days are warm but nights are starting to cool down.  Sow the largish seeds just barely covered, in soil mixed from two parts sphagnum peat moss and one part perlite, and keep moist with pure water.  In habitat, the seeds sprout after fires, and it helps to treat the seed pots with smoke after sowing.  This can be done in a metal trash can or similar non-flammable container:  set a small fire with leaves, grass and twigs, well away from the pots, cover the container, and let the seeds soak up the smoke for half an hour.  You don’t want to cook them, just expose them to the smoke.  Even with proper smoke treatment, expect to wait several weeks to several months before you see any action from the seeds.

After the seedlings are up and have produced a few true leaves, transplant them to individual containers, using 2 peat : 1 perlite again.  The containers should be relatively large; the plants, particularly R. gorgonias, have rather spindly roots, but grow much better if given a generous volume of fresh soil.

Seedling roridulas need the same conditions as adults.  Whatever their age, plants demand full sun for at least half the day, moderate humidity levels (not arid, but not saturated, either), evenly moist (using pure, low-mineral water, of course) but never waterlogged soil, and plenty of fresh air.  Ideally, the temperatures should be warm in the day, and cool at night.  In the wild, plants experience frost in the winter, but probably not severe or prolonged cold.  Plants grow year-round, but are most vigorous in spring and autumn.

I can’t stress enough that these are not plants for terrariums or tray-watering setups.  Stagnant, saturated air and/or insufficient light are deadly, and even in a sunny greenhouse in my cool-temperate Connecticut, USA climate, fungal infections can start during spells of cloudy, damp weather.  I’ve tried R. dentata outside here in Connecticut over the summer, but without much luck; the plants appreciate the higher light levels, but decline during sultry, rainy spells if the foliage stays wet for days on end.  Growers in Mediterranean climates might have better results keeping them outdoors.

Fungal problems are the primary difficulty afflicting Roridula plants; they manifest as browning and shriveling leaves, starting with the tips of branches.  Cut off affected shoots, treat with fungicide, try to get the plants more sun and fresh air, don’t let the leaves stay wet for long periods, and hope for the best.  Thrips are the only insect pests that I’ve seen on Roridula so far, but these can disfigure the leaves and stunt the plants, and are best treated with an appropriate pesticide as soon as noticed.

Another odd quirk of Roridula culture is that, while the plants catch scads of insects if given half a chance, they cannot digest their prey without the symbiotic assassin bugs that live on plants in the wild.  So, plants in an assassin-bug-less greenhouse need supplemental nutrition.  This is one reason to repot into fresh soil early and often, though foliar feeding to supply nitrogen will probably be required as well.  Use a high-nitrogen, low-phosphorous water-soluble fertilizer (such as 20-0-20, with micronutrients), diluted to about ¼ to 1/8 the recommended strength.  Proceed with caution:  test the diluted fertilizer on a side branch, and wait a few days to be sure that it doesn’t burn the leaves.  If the test leaves do well, then spray the rest of the plant, every few weeks during the warmer months.

Propagation of Roridula is best by seed.  Cuttings are possible, but tend to either wilt or rot before becoming established.  I’ve had them root, but never quite gotten a healthy new plant via this route.  The big, pink flowers appear mostly in mid-winter, and have to be pollinated to set seed, though outcrossing between multiple clones is not strictly necessary.  The anthers open via pores at their tip, which will release pollen if a scrap of paper is brushed across them.  Seeds mature after several months, and one has to watch the capsules carefully to catch them, as the capsules tend to split and spill their seeds suddenly on dry, sunny days.  If you do manage to cultivate a large Roridula, be careful about handling it, as the adhesive on the leaves is very sticky and difficult to wash off.  The adhesive is particularly nasty if you get it in your hair or on your glasses.

Unfortunately, even for CP veterans, Roridula plants tend to sulk along, looking like anemic sundews on sticks, and then suddenly die, long before they have the chance to flower or to cover your arms with sticky gunk.  I’ve grown R. dentata for years, from seed to seed, and I’m still vexed by unexplained, random losses.  Of the two species, R. gorgonias seems to germinate more reliably and hold up better in cultivation, but Drosera capensis it ain’t.   Good luck! 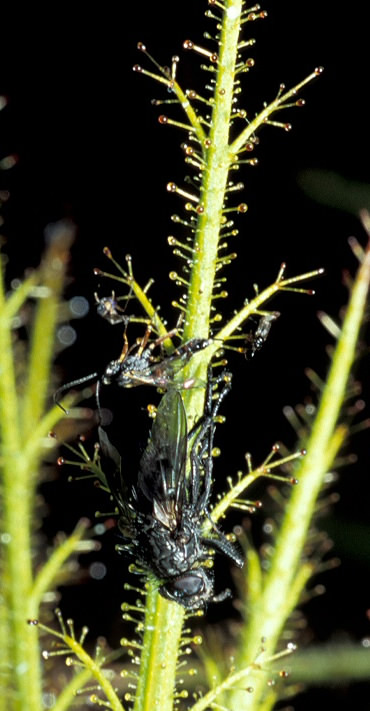