Drosophyllum lusitanicum, commonly known as the dewy pine, is a popular plant among collectors since it is the sole representative of its genus. It is also significantly different from other carnivorous plants in that it inhabits drier climates. Unfortunately, this plant also has a bad reputation as being difficult to grow and maintain. The main problem is that cultivation methods used for other bog-dwelling carnivorous plants are lethal for Drosophyllum. Specific challenges with cultivating Drosophyllum include: slow germinating seeds, root disturbance is often deadly and the plants are prone to root rot.

The first problem with this species is that the seed is slow to germinate. We have had seeds germinate 9 months after being planted. Peter D’Amato's book The Savage Garden suggests seed scarification to speed the germination process. Even with scarification, you should expect germination on the month time scale.  However, it has been our observation that seed germination was the best (at ~65%) when the seed produced in the early summer was stored dry in a refrigerator and then planted outdoors in the fall without scarification (temperature range ~ 40F to 60F, even photoperiod). The seeds do not require stratification, but the better germination rates in the fall suggest they may prefer cooler temperatures, so additional germination experimentation is needed. Plant the seeds on the surface of the soil mixture (see below) without burying the seeds. Keep the seeds constantly moist but not waterlogged. Peter D’Amato indicates that the seedlings have an inhibitory effect on other seeds, thus the plants (and seeds) should be well separated from each other. While this may be possible, we have not observed this in our plants; we have had seeds germinate in the pots of established Drosophyllum plants on multiple occasions.

The second problem with Drosophyllum is that root disturbance often kills the plant. Both Adrian Slack and Peter D’Amato advise against transplanting Drosophyllum. Peter D’Amato suggests germinating the seeds on damp vermiculite and then transferring the seedlings to their final growing pot immediately upon germination. While this approach works, it results in a small seedling in a rather large pot, which is not space efficient. Another strategy is to germinate the seed in small peat pots filled with the porous soil mix (see below). Poke a few holes in the peat pot to make it rather porous as well. Once the plant has reached approximately 5 cm in height, then plant the whole peat pot into the final growing pot. The roots will spread through the holes in the peat pots and the peat pot will eventually decay away. Thus, root disturbance is eliminated when potting the seedlings into the larger final growing pot. Be sure to use a large pot (10” to 12” in diameter) to account for future growth since you should not transplant the Drosophyllum plant again.

The last major problem is that Drosophyllum is particularly susceptible to root rot, thus it must be kept considerably drier than other carnivorous plants. It should never be grown on the tray system like other carnivorous plants. The soil mixture for Drosophyllum should be very airy and fast draining (e.g. 25% each of pumice, perlite, sand and peat) to reduce the chance of root rot. Additionally, we prefer to use terra cotta pots for this species due to their porous nature, which reduces the chances of the soil mixture getting too wet. Ironically, the plants should never be allowed to completely dry out. The pot should be watered every 2-3 days in warm climates, but do not spray the foliage during watering. Highly humid and warm environments also promote rot in this species; we have lost large plants in our greenhouses to root rot. Plants grown outdoors year around in Davis, California (a Mediterranean–type climate) faired far better than the ones grown in the greenhouses. The cool and moist winter does not seem to bother the plants.

Drosophyllum grows best in full sun to mostly sunny conditions even in warm climates. The plants seem to be able to take light frosts according to Peter D’Amato and our own observations. It may be possible to grow Drosophyllum indoors, but it will require intense sunlight (south-facing window). It may also like to be moved outdoors for the winter. 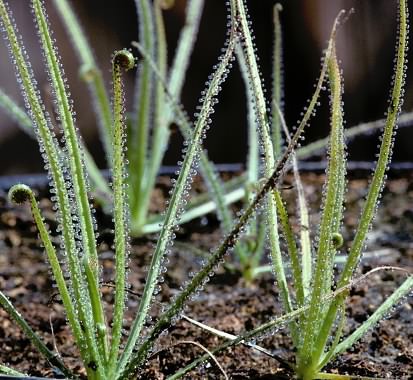 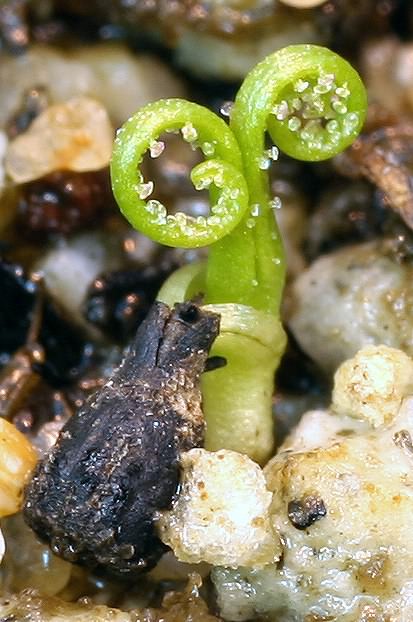 Drosophyllum lusitanicum seedling. Note the cotyledons didn't emerge from the seed. This has been typical of the seeds observed germinating. 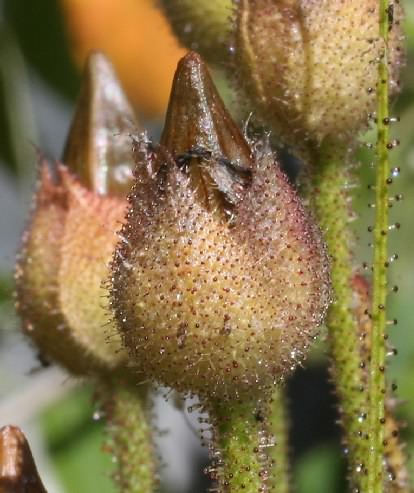