The warm temperate Drosera consist of the Drosera capillaris group and the Drosera brevifolia group. These species grow in areas with a definite but mild winter. The plants can handle frost but do not form hibernacula during the winter and can not tolerate extensive freezes. They can be grown outdoors year round in USDA zones 9 and warmer. In colder climates they can be grown outdoors during during the warm months and overwintered in a cold frame, garage window, or cold greenhouse. They can also be grown in heated greenhouses and terrariums but will show periods of semi-dormancy.

There is an extreme amount of variation in Drosera capillaris in the south eastern USA. The plants range from flat and "chubby" like the ones in central Alabama to erect and long petioled like the ones in central Florida. Some populations may vary in form throughout the year or with exposure to the sun. The northern ones are summer growing while the southern ones can be more robust in the winter. The Brazilian plants are "chubby" like the plants from Alabama.

Drosera brevifolia and related species are found in North and South America. The group includes Drosera brevifolia found in the south eastern USA and south coastal Brazil, D. colombiana found in Colombia, D. panamensis found in Panama, and D. cayennensis found in Venezuela and northern Brazil. Drosera brevifolia tends to be a biennial. That is it grows for a period of time which may span one or more growth seasons then blooms itself to death or near death. The other species in the group live in seasonal habitats where they die back during the dry season. They are extremely rare in cultivation so we don't know how they perform under different environments.

These species can be started from seed like subtropical Drosera. Please see Sowing Seeds Step-by-Step for more details on starting seeds and the growing guide Growing Subtropical Drosera for more information on growing them. Adult plants are best managed if grown in small pots in trays of water.

These species can live for years if you do not let them bloom. The plants tend to go though cycles of growth and semi-dormancy. Cut off the flower stalks when you first notice them. If you let it bloom, make sure you collect the seed as the plant is likely to severely decline or die at this point. 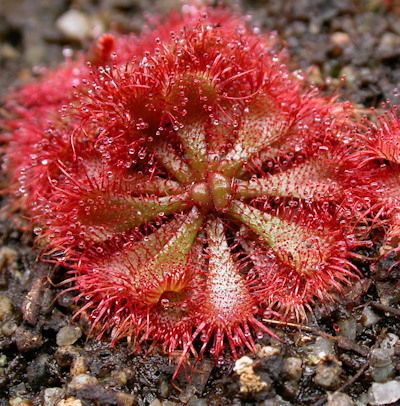 Drosera brevifolia grown in a terrarium. The plant can look a lot like Drosera spatulata but the flowers are relatively larger on shorter scapes. 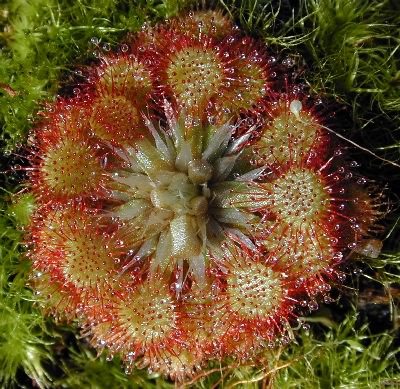 Drosera capillaris from Autauga County, in central Alabama. This 20 mm wide plant is growing in a cool greenhouse. 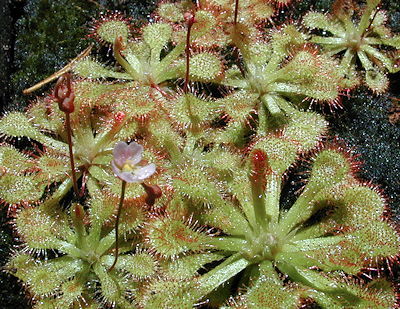 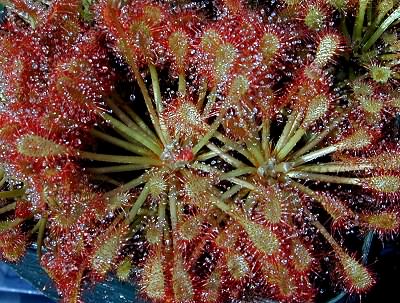 Drosera capillaris from Pasco County, in west central Florida. These 60 mm wide plants are also known as the "long arm" form and "Pasco Giant". These plants look a lot like Drosera intermedia. 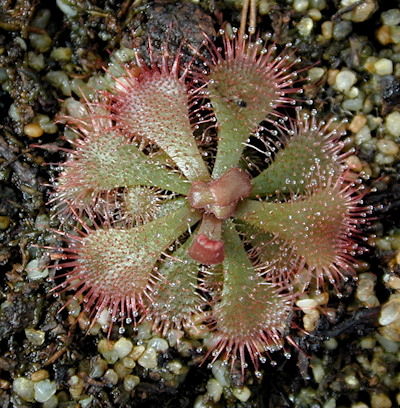 Drosera brevifolia. This 20 mm wide plant is growing in a cool greenhouse. It would be dark red in brighter light.